This post describes some experiences aboard AmaWaterways AmaDante.  This is the next in our series about the Beer edition of our Joe Sixpack Europe’s Rivers and Castles river cruise.  We’ve decided to summarize the cruise by themes - so far we have an Overview post and two posts about the special beer experiences - part 1 and part 2.  In this post we talk about the ship. 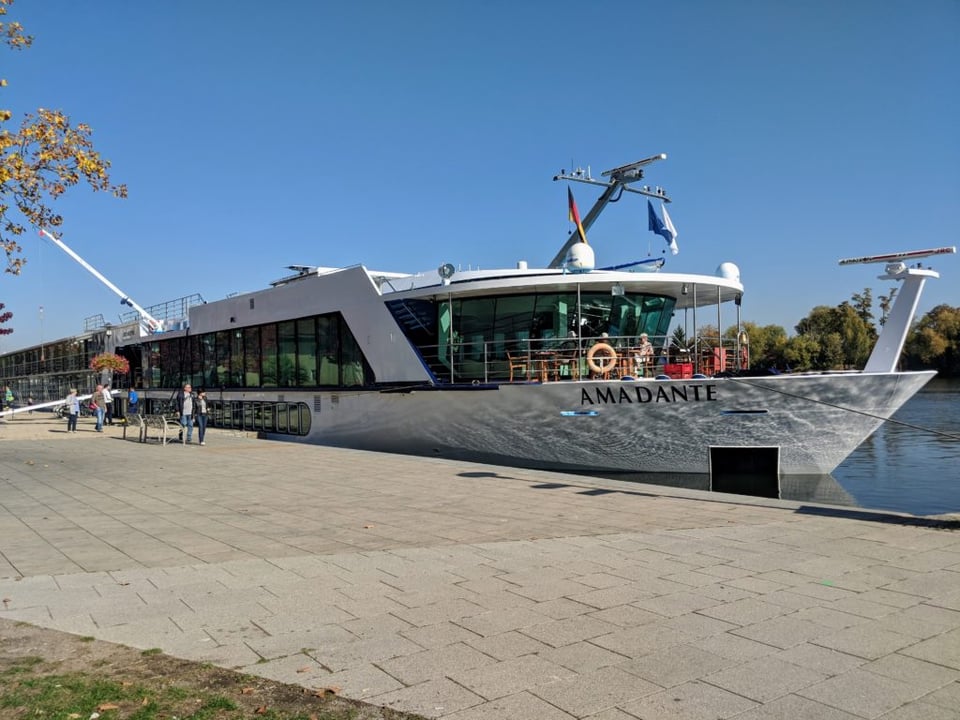 The AmaDante is one of AmaWaterways classic ships. This means there’s no true balconies on this ship.  All cabins on the top two levels have french balconies - meaning you can open the floor to ceiling glass sliding door all the way, but you can’t step out.  This is contrasted with Ama’s newer ship designs that have twin balconies - one French balcony and another true balcony in the same room. The classic ships offer a great value which include a very nice Chef’s Table restaurant in the back of the ship as well as all the other amenities like bicycles on board, a hot tub, and a spa.

One of the things I always tell clients is that there’s real differences between the various river cruise lines.  Here’s a mini blog series on the comparison points: part 1, part 2, and part 3.  One of the things I really like about AmaWaterways is the design of their ships.  Sure, the rooms are well laid out, the lounge is nicely decorated and the dining room has tables for 2 to 8 people.  But I’m talking about marine architecture - specifically the ship’s draft. This is simply the amount depth below the water surface.  Why is this so important?

The water level in rivers is dynamic.  When it rains a lot, water levels are high and floods are a risk. But this year, much of Europe has been in a drought.  And for uncontrolled rivers like the Rhine that results in very low water levels. The AmaDante, like all AmaWaterways ships have the lowest draft in the industry which means that they can sail in very low water.  Sure enough, while we were in Mainz, we were withing a few centimeters of not being able to sail the Rhine.

The captain waited for evening when the water levels were expected to rise.  We were the only river cruise ship sailing at that time. Crystal, Viking, Uniworld, Tauck had already stopped sailing that portion of the river.  Had we not been able to sail our nice river cruise might have turned into a bus tour; or we would be packing and unpacking a bit more. Either would have been very disruptive. In fact in Rudensheim we saw the Tauck crew transferring luggage from a hotel stay.

Instead we had only a minor disruption.  Our cruise manager Nick did a great job juggling tours so only a few tours were affected.  The key was we got to Cochem on time which meant that the rest of the tour, and especially disembarkation were totally unaffected.  The Captain did a great job navigating the very low water levels.  He later told me that he would not be able to make it if another ship were sailing past since the wake would displace too much water (these ships don't produce a lot of wake)!

Another highlight of the cruise was the food.  Here’s some sampling of the food we had on board:

For dinner, we typically ordered an appetizer, soup, and entree and desert. But the portions are small enough that you don't leave overstuffed. And there's always lots of options available.  They were very attentive (as always) to food allergies.  And there's several wines to choose from; the staff is certainly not shy about refilling those wine glasses.

The crew of the AmaDante 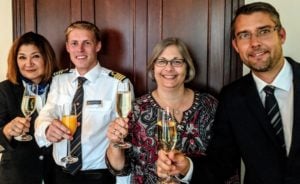 From left to right: Hotel Manager, Captain, me and the Cruise Manager

It's easy to describe the service - excellent.  The AmaDante's staff is very attentive.  Our Cruise Manager Nick was terrific - not only in the scheduled events but also in juggling the schedule when we were delayed due to the Rhine's water level.  Everyone in the restaurant, housekeeping and pursor's desk were super friendly and helpful.  Nothing is ever a problem

and most the crew really just wants to enjoy and have a great time.

This is usually not something to highlight on a river cruise. But this time was different.  One evening, Lindsay Hamilton performed. Linsay is a West End London actor (like Broadway) who moved to Germany to be with her husband.  Not only does she have a great voice but is really entertaining.   Pictured, she sang with her 9 year old son.   At the end of her act, she came around to each group and took selfies, while singing.  She was just a lot of fun.

The ship felts like home after only a few hours.  It's nicely appointed but certainly not extravagant.  The rooms were laid out so well - we were away for 3 weeks and had no problem fitting everything in our cabin.  We especially appreciate the under bed storage.  We always looked forward to meal time.  But most of all the staff on board made the ship welcoming and enjoyable.

Next: Excursions and Destinations on our Joe Sixpack  Europe's Rivers and Castles: Beer edition

With our 4th Joe Sixpack themed trip successfully completed, it's time to let everyone else know...