Prague:  the starting point for our beer themed river cruise 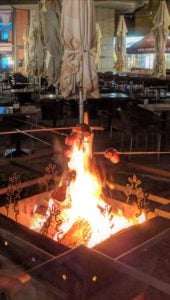 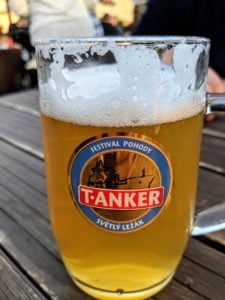 Our first official beer event  in Prague was a quick walk to a local brewery called Pivonar Narodni Brewery and Beer Garden.  This was both a dinner featuring local favorites as well as a beer tasting. The highlight for us was roasting sausages on an open flame outside in traditional Czech style (think marshmallow roasting!).  We also toured this very small brewery, complete with open fermentation tanks. No CO2 is added - rather they use bladders and delivery to local bars by truck.  We had a rather unbalanced IPA, a lager and unfiltered lager and a dark lager. Although the beers were not stellar, they were unique in taste. (some thought they tasted like the chemicals used in microwave popcorn bags).

We had a traditional Czech dinner of beef stew, dumplings, garlic spinach with potato pancakes and marmalade for desert.  Czech dumplings resemble compressed bread.....this is one food that probably won't be exported. 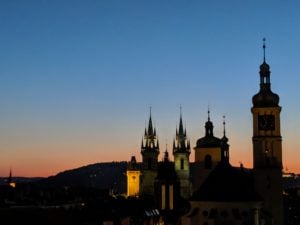 The View from T Anker

The next evening we went to T’Anker - a bar near our hotels (Marriott Old Town, M Gallery The Grand Majestic and several others).  What made this visit special was the fact we were on the top floor deck overlooking Prague. The beers were as excellent as the sunset view.  When we finally got our bill, the waitress advised us that "service was not included".  Although they meant that the tip is not included on our bill, really the service was terrible and was definitely not included in the experience.  No worries though, the local clear pils, unfiltered variety and a very nice IPA were all great. Especially with the spires of Prague as a back drop.

Our group next sojourned to Pilsen home of Pilsner Urquell.  One of the highlights was sampling the unfiltered pils from the barrels in the caves.  While the caves are no longer used for refrigeration, it was so interesting to see and taste the traditional brewing process.  We also saw the very modern brewery (copper fired kettles and stainless steel lagering vessels) and bottling centers. The tour lasted several hours 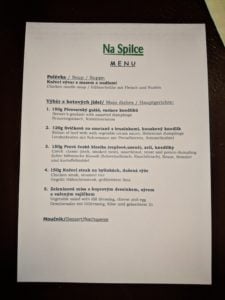 Lunch was tasty but not light 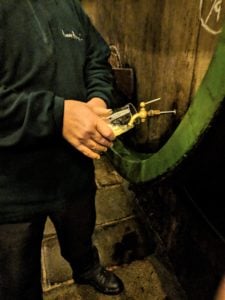 Unfiltered Pils in the caves at PIlsner Urquell

and was comprehensive - it included a museum and history exhibit.  Our guide kept saying that the beer is made the same way it has always been made. Yet the machinery is all new, they no longer use caves to lager the beer and there's so much automation in this very modern facility.  They refer mostly to the local hops and water drawn from 100 meter deep wells. The interaction between the water and the hops is what makes this beer unique globally.

Next, we had lunch at Na Spilce, a very large on site restaurant.  One look at the menu (see photo) and you'll see that Czech cuisine is a bit on the heavy side - if I never see another dumpling again, that's OK.  Food wise, we're quite happy to be heading off to AmaWaterways AmaDante.  During lunch we sampled their light, dark and mixed beers.  And of course we bought a case or two to bring back to the ship.

On the Ship for our beer themed river cruise 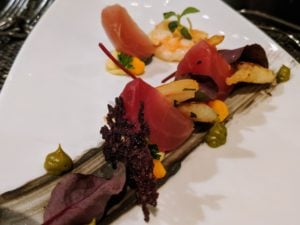 One of 5 courses at Chef's table

Our first two nights on the ship, our group dined at the Chef’s table restaurant for a food pairing dinner. Here, Don Russell, aka Joe Sixpack, not only hand picked various beers to go with each of the 5 courses served but described each one.  Don was both educational and enjoyable. One of his favorite lines is that beer is a social lubricant - how true. Here’s the beers he paired:

Try picking up these in the States!  The Chef’s table serves terrific food in an intimate setting, holding only 24 at max. So our group divided into two nights.  Total beer takeover. By the way, we purchased most of the beers we used at a grocery store in Prague. 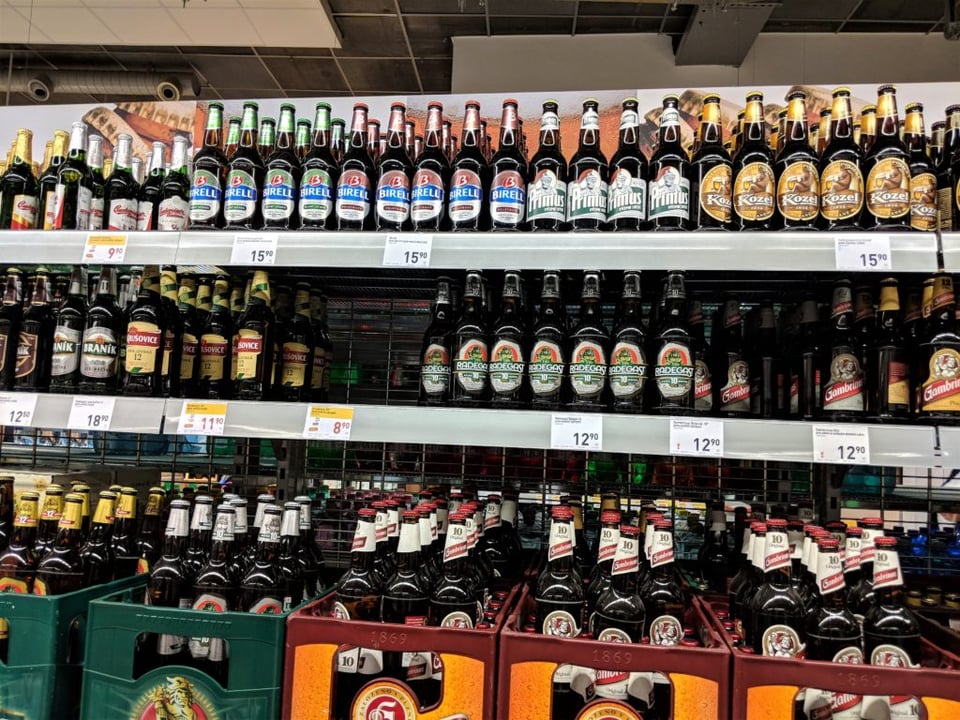 Stocking up for the trip

We'll pick up the rest of the trip with Beer Themed events Part 2.  There's simply too many beer themed events to fit in one post!

This is the second part of our beer themed river cruise focused on beer themed events.  Part 1...