Today was our first full day in Cairo, having flown in yesterday from Amman.  Here's our previous blog from Jordan.   Cairo by day can be described as many things but snarled in traffic pretty much sums it up.  Of the 20 million people making their residence here, it seems they are all on the road at the same time and place.  Nevertheless, we were able to see two different things today with AmaWaterway's Cairo team, headed by our Cruise Manager Sami. 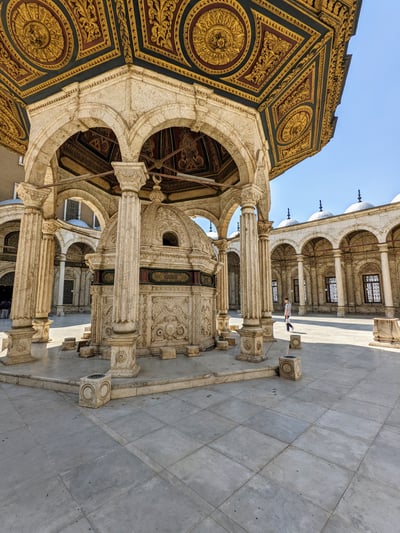 Our first stop was Saladin's Citadel.  The citadel unsurprisingly sits atop a high rock outcropping.  Driving up to the top, we went past the limestone quarries used for the pyramids in Giza.  It was built in the 12th century as a defense against the Crusaders and evolved into the seat of government for Egypt until the 19th century.  In the 13th century they built an aquaduct to bring water to the Citadel, uphill of course.  We drove past a long portion that still remains.  The fortress is complete with long walls and the typical defensive openings in towers for arrows and cannons.

But the real highlight of the trip was the Alabaster Mosque.  We were able to go inside and learned that most Mosques have both an outside courtyard and an inside prayer hall. The outside is used to wash oneself and features a hand carved alabaster fountain which provides the cleansing water.  It's topped with a wood roof covered in gold leaf.  The French gave a clock tower (that never worked) which sits at one side of the courtyard.  IN exchange they were gifted two obelisks - one that famously sits near the Louvre in Paris. The Alabaster Mosque is unusually ornate as it was meant to be a copy of the famous Blue Mosque in Turkey.  Inside the mosque, prayers are said facing towards Mecca as delineated by the direction of the Mosque and a large alcove in the appropriate wall. When we were there, they had just finished restoring the floors.  But typically there's rugs down to facilitate prayers positions. The reason shoes are taken off outside is to prevent dirt from tracking in;  prayers involve touching the head to the floor.  The inside of the mosque is strikingly beautiful.

According to our guide, Islam is simply a way of life. There are 5 key components of Islam: acknowledgement that Allah is the one and only God, Prayer (2 - 3 minutes long each time),  Fasting during Ramadan, Charity (2.5% of your year's savings) and Pilgrimage to Mecca.  Everything else, from burkas, to jihad are things people and different sects have made up or interpreted in a particular way.  She thought ISIS are fanatics and crazy people in general.   Prayer is to be done 5 times a day at certain times but it is not to interrupt your daily life - there's flexibility in the timing.  She didn't use the word "community" but I think that's what she meant.  It was a valuable perspective.

This is a section of the gold plated covering to King Tut's burial chamber.

King Tut and the mummies

After our visit to the mosque we drove by the city of the Dead.  This is  a very large cemetery,  that people started living in and now is an integral party of the city, complete with running water, electricity and public transportation.  It's a place for poor people who have no where else to live except the modest buildings used to house their dead relatives' remains.  Cairo is a huge city of 20 million and while there's clearly some wealth and an emerging middle class, there's a lot of poverty which manifests itself in the City of the Dead.

We drove to a lovely lunch spot high on a nearby hill.  Next we visited the Egyptian Museum, which is over 120 years old.  Our expectation was that the new museum would be open by now - but COVID delayed the opening despite what we were told.  The old museum, right off Tahrir square is the classic old style, very little explanation on most pieces, each of which is tagged with catalog numbers.  But inside are true treasures of the human civilization.  Some highlights: 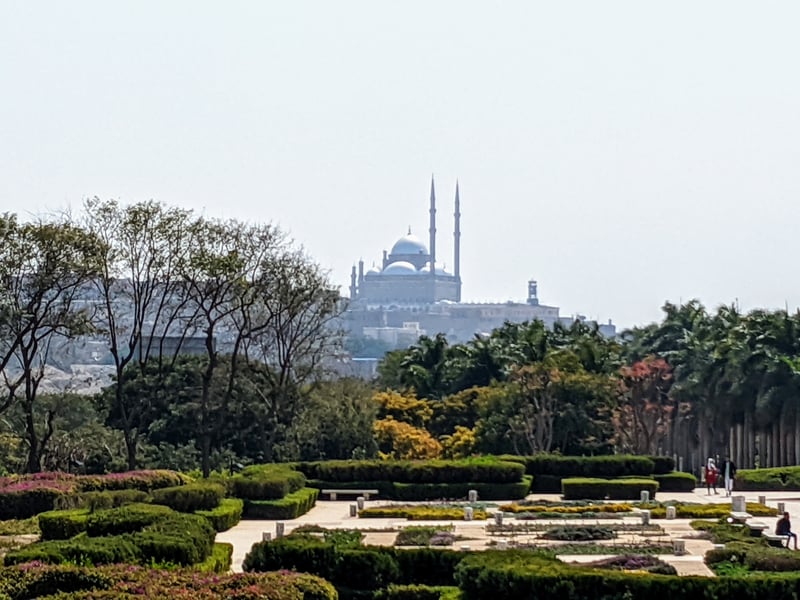 The view of the Alabaster Mosque from our lunch place.

In a few weeks, in mid March we leave for our first trip to the Middle East. We're off to Jordan...

Today we are in Luxor, nearing the end of our Secrets of Egypt & the Nile tour with AmaWaterways. ...