We left the ancient worlds of Luxor early in the morning for a flight to Cairo.  After landing we spend the rest of the day in Cairo.  But just like that, we fly out late that night, ending our trip.  We started in Amman Jordon and end in Cairo Egypt.  We'll sum everything up in our next post. For now, enjoy our last day in Cairo.

The Throne room at the Palace.  Note the Arabesque window shapes.

We're brought to the Abeen Palace in the heart of old Cairo. It was built for the Royal family of Egypt in  1874 and really defines "modern" Egypt.  It's meant to bring European influence into Egypt.  It's 500 rooms large and elaborately decorated, with a lot of French influence.  While on our tour, it seems each room is more elaborate than the next.  It certainly rivals the palaces we've seen in Europe both in terms of scale and luxury.  We ended with a lunch catered by the Four Seasons.  And indeed we felt like royalty during lunch. 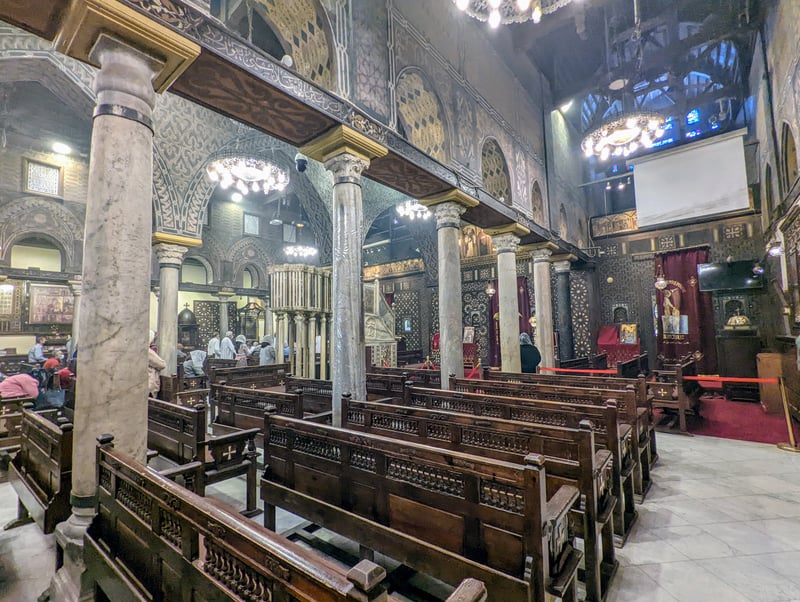 Coptic Church in old Cairo.  There was a lot of incense in the air which makes it difficult to see the supper part of the church clearly.  You can see those attending church in the background. The walls are filled with icons of saints.

We next went into Old Cairo and visited the Coptic Church (the Hanging Church).  The church was built on the tower gate of an old Roman Fortress  and the nave is suspended between structures (and thus hangs from the towers).  The wooden roof is in the shape of Noah's ark.  It was built in the 7th century and is a wonderful old structure.  Coptic Christians represent between 5 and 15% of the Egyptian population, depending on the source.  The day we visited, there was a service going on - still we were allowed to tour the main sanctuary and adjoining chapels. The chanting prayers were very interesting to listen to though the incense was very strong.  The church is closely aligned with Greek Orthodox.

Next up:  We wrap up with some final thoughts on the trip

Today we are in Luxor, nearing the end of our Secrets of Egypt & the Nile tour with AmaWaterways. ...