Interested in a river cruise in Germany to see some great destinations?  This is the fourth in our series on Europe’s Rivers and Castes Beer edition.  To catch up:

In this post, we’ll talk a little about some of the excursions we took.  We won’t bother describing the same excursions we did last time - check out our original trip notes for those.

Bamberg:  The start to our river cruise in Germany 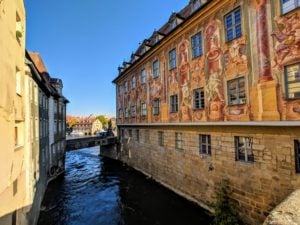 Here we did the normal Bamberg walking tour followed by a Joe Sixpack excurions described here. This blog post from our previous trip describes most of the walking tour.

Bamberg is full of history. From Medieval Gothic cathedrals, to fast building bishops that run out of money to half timbered homes.  Actually only a few of these old style houses still exist because in the desire to modernize, one of the early  mayors gave a tax exemption to those that plastered over the half timbered houses.  Progress!  But to see well preserved buildings from the 11th to 18th century truly makes Bamberg special.

We were told the story of the mural on the city hall (Altes Rathaus) which straddles the river (something you have to see and hear in person to fully appreciate).

In the afternoon we cruised the Main-Danube canal and basically relaxed in the sunshine.  Part of cruising is eating and drinking of course.  Besides the beers from Prague we now had a great selection of German beers which went down easily on deck.  And while lunch was great, dinner was especially good. 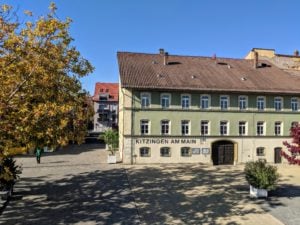 Kitzingen as viewed from the deck

Well, truth be told we decided to sleep in this morning. Since we've already been to Kitzingen and there's limited excursion options, we relaxed a bit.  One of us slept late, one of us exercised and we both had a late, light lunch.  Sometimes it's easy to get caught up in having to do everything that's planned, for fear of missing something.  But this is your time on the ship and AmaWaterways encourages you to do your own thing - even if it's nothing at al.

On the accompanying picture, notice that we dock right into town.  This is a really nice feature of river cruising, especially a river cruise in Germany.  You simply walk off the ship, and walk into town.  Everyday, the AmaDante staffs takes out a couple of bikes to allow you to ride around town as well. Nice.

At Kitzingen as seen from the AmaDante 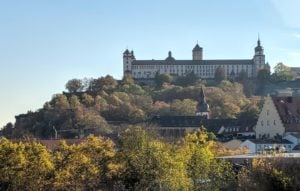 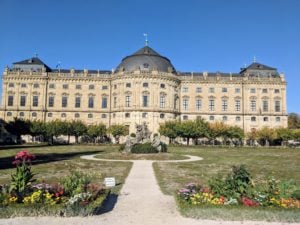 As you cruise into Wurzburg you see an imposing palace up on a hill.  You then learn that was the old castle and it simply wasn't good enough so they built a new palace in the heart of the city.  That new palace is simply called the Residenz.  This Baroque palace was where the Schonborn family lived who were the line of Bishop Princes that ruled this region.  The structure, paintings and ornament are truly over the top, bordering on gaudy.  But also truly impressive and clearly befitting of a wealthy powerful ruler.  We couldn't take pictures, so to find out what it looked like on the inside, click here.

Another day, another Joe Sixpack tour described in our previous blog here.  But that evening we had a glass blowing demonstration on board. We had seen Hans before on our previous sailing - we had even bought something from him.  In this sailing however, he was very uneven, almost uncomfortably so. He talked more politics (East German vs West) than glass blowing. Overall a disappointment.

Here's the post from our previous trip so you can read more about Wurzburg and Kitzingen.

We took this picture just as we were leaving Wertheim - enjoy the view of a river cruise in Germany! 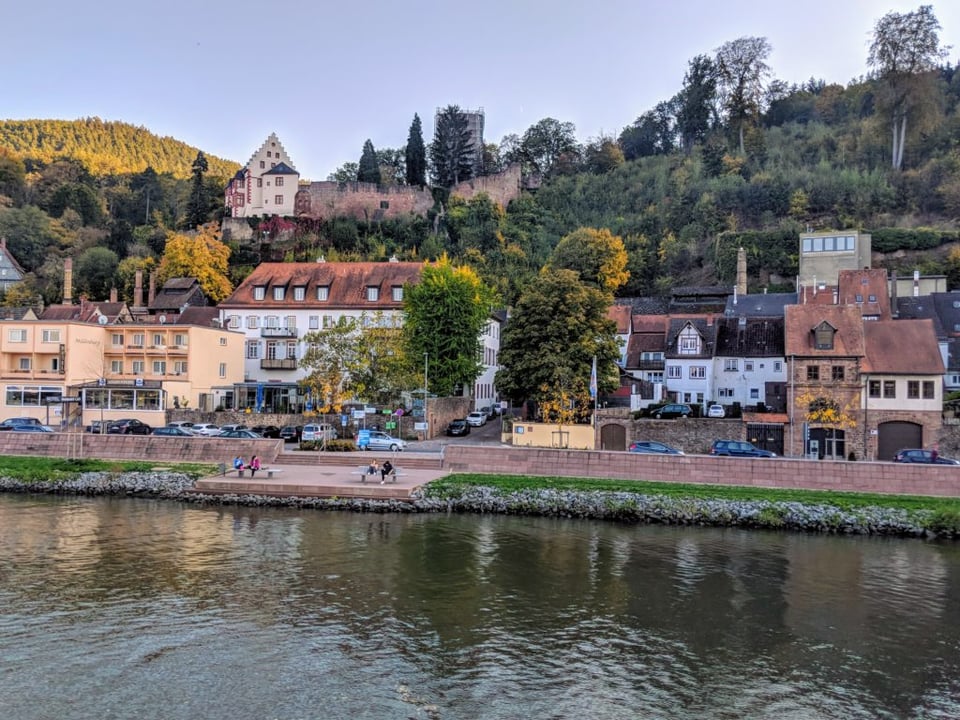 Typical view from the AmaDante

The view from Rudensheim bike tour

Because of the very low water, the planned activities had to be modified a bit. We toured the town of Mainz including a church with some classic Marc Chagall glass works.  This is more fully described in our previous trip here.  Once we made it to Rudesheim, we were able to go on a bike tour through the Vineyards.  The tour followed the Rhine river for a spell, then we went through a nice little village on our way uphill to the vineyards.  The region grows Riesling almost exclusively. We bicycled past two of the top 10 wine estates in Germany. The very dry summer caused a very early harvest, which created other issues since school and migrant worker schedules no longer lined up with harvest time.

Typically, the afternoon is reserved for sailing through the Rhine Gorge, famous for the many castles lining both sides of the river.  The low water situation, however meant that we had to wait till the evening to make the trip.  To our delight many of the castles were well light.  Picture taking was difficult but I hope you can imagine what it was like to see the castles almost floating above us as we cruised the river. A river cruise in Germany certainly features castles.

Castles in the evening 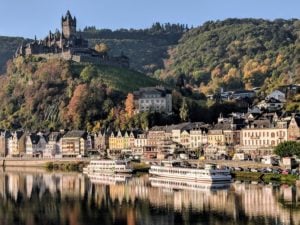 We decided to do a mustard factory tour in Cochem.  This was one of Ama’s special interest tours - perfect for us since we’ve already done this itinerary.  It's funny to call this a factory since the production line consists of one mixing barrel and one grinding mil.  In fact the demonstration was done on the production line. Highlights included smelling the mustard after it was mixed with the vinegar (clears the sinuses) and tasting about 10 different varieties.  We also purchased some to take home - nothing beats mustard made in the traditional German method. Interestingly in a sign of our global economy, the mustard seeds come from Alberta.  We weren't allowed to take pictures inside - but here's their website for more information.

We arrived in the very small town of Zell in the late afternoon and led from the ship to the town square by a brass band. As we walked through this small village, local townspeople opened up windows to wave and some joined the parade.  In the town square was a little wine festival - the band played all sorts of music, they served about 10 types of Reisling wine and they even had some snacks. Oh and we also brought some beer along too.    A river cruise in Germany features wine and beer as well as castles.

Here we went on the traditional walking tour and ended with a Joe Sixpack beer themed event described here.  You can read about Trier from our original tour blog here.  Pictured is the main square in Trier - full of historic buildings and modern commerce.  Many people work in Luxembourg but live in Trier since Germany is less expensive than Luxembourg.  There's also a large university student population here.  Add in

tourists and you get a vibrant economy.

So we learned that a river cruise in Germany features castles, wine and beer.  What else?  Great views, quaint towns and smooth sailing.

In our final post of this series on AmaWaterways Europe's Rivers and Castles: Beer Edition,  we review some river cruising fun.

Myths about River Cruises – debunked (except one)