With our 4th Joe Sixpack themed trip successfully completed, it's time to let everyone else know what a great time we had.

This is the first of a series of blogs documenting our Europe’s Rivers and Castles Beer Edition.  Since we’ve written a day by day itinerary before, this time we thought we’d describe the trip thematically. This post will provide an overview.

Our trip started in Prague.  While Prague is a beautiful city in it’s own right, the Czech Republic now drinks more beer per capita than any other country.  So we thought a pre cruise extension in Prague would make sense. We then went to Pilsen, home of the entire Pilsner style of beer. 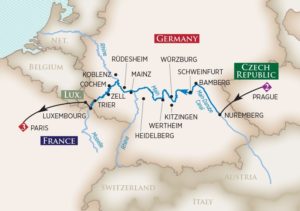 We met the ship in Nuremburg Germany where we proceeded along AmaWaterways' standard itinerary of Bamberg, Kitzingen, Wurtzburg, Wertheim, Mainz, Rudesheim, Cochem, Zell and Trier.  See the nearby map.   Our ship was the AmaDante, one of AmaWaterways very capable classic style ships.

Along the way we sailed on the Main-Danube Canal, the Main River, the Rhine River and the Mosell river.  We sailed from beer centric Bavaria to wine rich Franconia. And we cruised past and explored many castles.

We had absolutely great weather for all 10 days - evenings were crisp while days were sunshine filled with highs in the mid 70’s.  We had just about 40 people in our Joe Sixpack group on a ship filled to about 130 people.

So what's a Joe Sixpack themed trip?  It all starts with Don Russell, aka Sixpack.  He and I work together to modify a standard itinerary to feature local beers.  By customizing each standard itinerary, we feature local beers.  This includes beer pairing dinners or lectures, visits to local breweries, pubs and bottle shops and bottle sharing sessions. These are run by Don Russell, a true beer expert and lover.   Talking beers with Don is like talking football with Doug Peterson (Coach of Super Bowl Champion Philadelphia Eagles).

Here's some examples of our previous Joe Sixpack trips.  Our first, in the Spring of 2015 was on the AmaWaterways Tulip Time cruise. Our second, in December 2015 was on AmaWaterways Christmas themed cruise down the Danube.  In 2017 we visited Ireland with CIE tours for our Beer and Whiskey tour of Ireland. We have our fifth Joe Sixpack trip planned for Alaska in early Sept 2019. 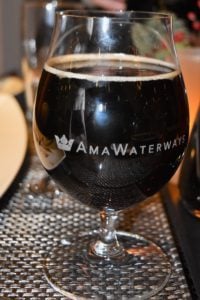 These are not booze cruise type trips.  Some attendees are hard core beer nerds or affectionatos. They take notes on each of the new beers we try. Others love craft beer and just want to know more.  Many are home brewers.  Some are just curious to see what beers in Europe are all about.  Some are just along for the ride with spouses.  There's plenty of non beer activities since these trips are all based on the usual culturally rich itineraries offered. For this trip, we simply modified the standard AmaWaterways Europe's Rivers and Castles river cruise excursions. Sometimes we add on top existing excursions - for example, we all toured the UNESCO city of Bamberg Germany, but instead of free time, we visited some local brew pubs.  But sometimes we totally deviate from the standard offering - for example we stopped at Pilsner Urquell on route to Nuremberg.  We prefer to think of these as beer enhanced trips - so if your spouse is just not that into beer, they will have plenty of other options.

In our next post, we'll focus in on the beer themed events we ran.  This will give you some real examples of what a Joe Sixpack themed trip is all about.

In summary we had a fabulous trip.  We found some great beers, some great destinations and some great excursions.  We had a low water situation which the ship somehow managed to get through. The trip was both relaxing and full of highlights.  It’s best summed up by  Don Russell aka Joe Sixpack in this video.   Here's his top six moments from the cruise:

In the succeeding blogs,  we’ll explore the following themes:

So what makes river cruising so much fun?  In this post, our last in the series, we’ll use examples...