This is the first post about our trip to Egypt with Ama's Secrets of Egypt and the Nile cruise.  We decided to add Ama's pre-cruise extension to Jordan.  In fact we added an extra day in Amman even before the extension started - an extension to the extension.  That was a good decision.  Our flight landed at 9 pm local time and because we had a long layover in Frankfurt, total travel time was close to 24 hours.  Jordan is 7 time zones ahead of our normal east coast time zone.  We splurged on business class which made the trip very tolerable.  The key was access to the United / Lufthansa business class lounges which allowed us to shower and clean up in Germany before our 4 hour flight to Amman Lebanon.  The flight from Newark to Frankfurt was easy, given the excellent business class  seats on our 787. Still, it's a very long travel day.

So that first day in Amman was spent adapting and catching up on sleep.  Our hotel, the St Regis Amman is very nice, if a bit pretentious for our tastes.    But they have  great  breakfast buffet with many of our favorite Middle Eastern dishes.  We made it down to breakfast by 10 that first day.  Had we not arrived a day earlier, we would have had to been up hours earlier to meet the tour leaving at 8 AM. That will be us tomorrow.  We really needed the extra few hours of sleep.  We took a walk around town near our hotel - which was a bit of an obstacle course,  a good reminder not to drive here, and a reminder that Jordanian drivers love horns and apparently either accelerate very fast or brake very rapidly. We also didn't realize just how hilly this part of town.  Be prepared. We also went to the very well equipped fitness center before relaxing, catching up on world events and emails and having a lovely dinner upstairs. 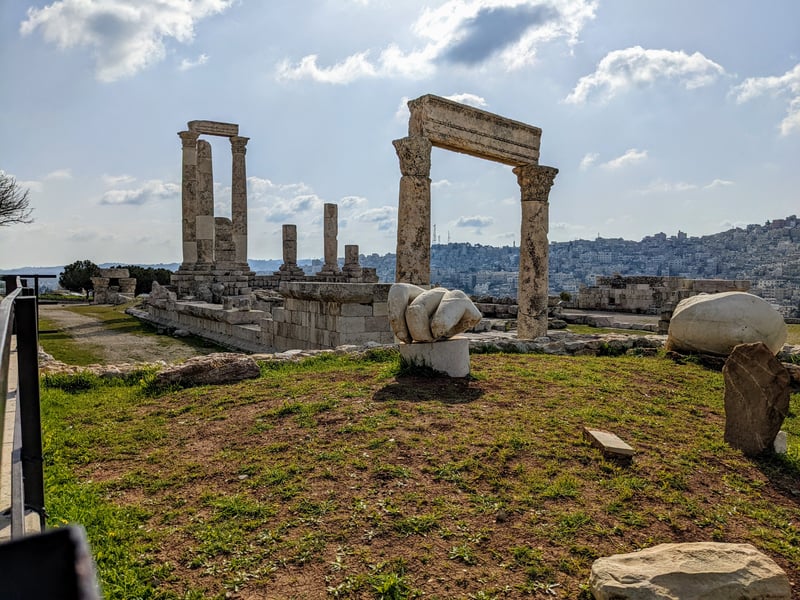 View of three of Hercules fingers from a statue that used to grace the Temple to Hercules.  Amman, Jordan.

The first real day of the Amawaterways program began with a stop at the Citadel.  This site, high on one of Amman's 7 hills hosts a large archaeological site and museum.  The views of old and new Amman's surrounding neighborhoods were great. But the real highlight was the Roman ruins including the Temple of Hercules.  Fragments of a 40 ft tall statue of Hercules have been found, most notably several fingers.  The Citadel also includes a nice museum, displaying artifacts found on the site from the stone age (up till about 10,000 years ago) through the Bronze ages ( Biblical times), Iron ages, Byzantine eras and the more recent (post 8th century) Islamic periods.  It was  a great way to start the trip - combining some great views of the city and it's long historical significance. 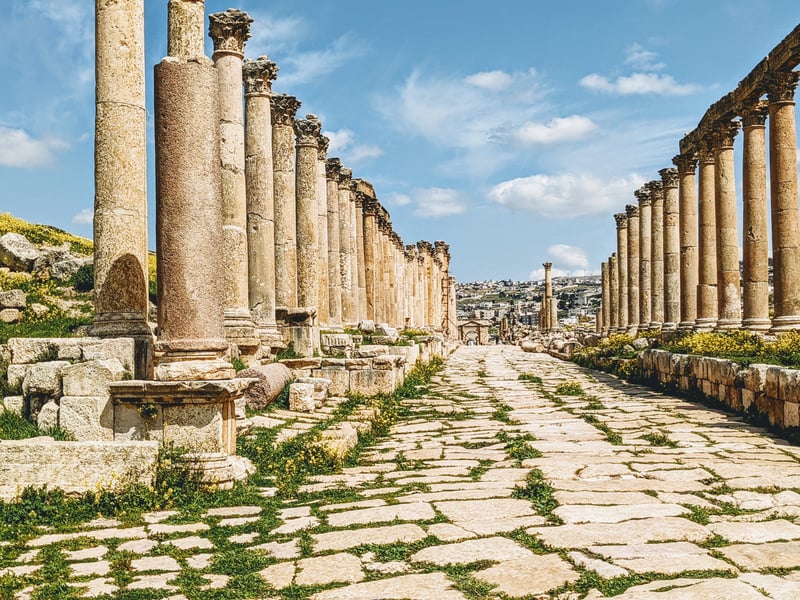 The main North- South artery in Jerash, Jordan; Earning the name city of a 1000 columns.

The real highlight of today though was our next stop in Jerash. This is the largest and best preserved Roman city outside of Italy.  Having been in Italy though, I'd put Jerash right up there with any city in the world for understanding and visualizing what Roman life was like.  We passed under Hadrian's gate, marking the entrance to the archaeological area.  Amazingly, this is the same Hadrian famous for the wall across the northern Britain marking the northern boundary of "civilized" society.  It's an immense structure to be sure and still standing without any cement in the original construction.  Once through the gate, there's a large hippodrome.  It provided chariot racing and horse riding events for 17,000 spectators.  Walking further North, we found ourselves in a an oval plaza, ringed with columns, the Forum Cardo. Basically a gathering place - the heart of the city (as in Cardio).

Off the Forum Cardo was the very well preserved amphitheater, a large entertainment venue.  While a small group played bagpipes, we explored the theater, climbing the steeply pitched seating area.  We can't really call these ruins because they serve the purpose very well even today. Walking along the main North South road, lined with majestic columns is a sight to behold.  The pavement, while a bit bumpy after 2000+ years of settlement, creates a true road for what seems like miles. The road is complete with underground water system (and manholes for access), speed bumps / pedestrian crossing areas and grooves from the chariots.  Walking toward the south gate we then explored the Artemis temple, up very high containing mostly Corinthian columns and occupying a very large plateau offering excellent views.

We had a great lunch at the nearby Lebanese Restaurant. Classic Mediterranean fare, including great pitas, hummus, fattoush, baba ghanoush and shish kabob.  We finished with a small custard (almost like yogurt) topped with local honey,  crushed pistachio and rose water. 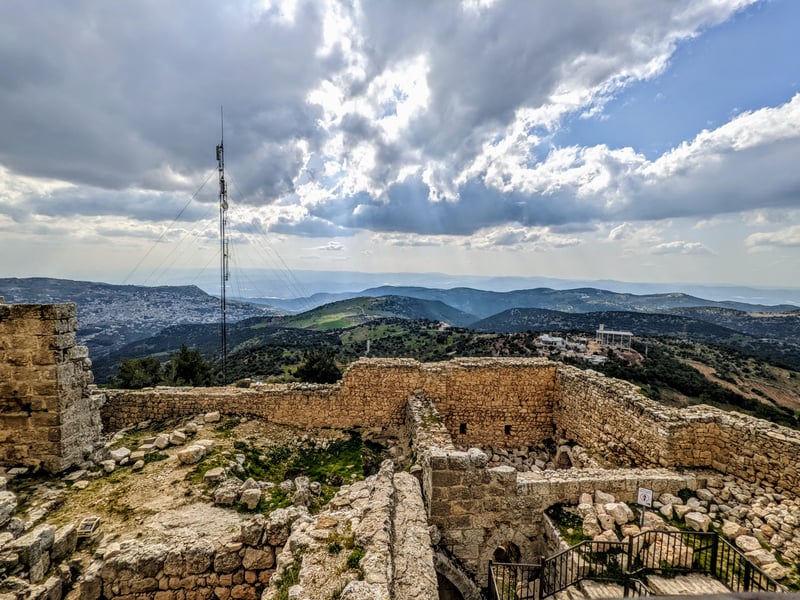 The view from the top of Ajlun castle with the Jordan river barely visible.

The day ended with a stop at the Ajlun castle.  This sits atop a very steep mountain and was originally built in the 12th century.  The castle was interesting but perhaps the best feature was it's location. From the top, you can see the Jordan River, Israel and vast views of Jordan's very hilly northern areas.  From below, it appeared impenetrable, perched upon a very steep knoll.

We got back to the hotel by 5 pm having left it at  8 am.  Between the excellent breakfast buffet and great lunch, no one was had much interest in dinner.  Maybe a snack in the room is all.  Early to bed tonight as we were fighting a combination of jet lag, a long day of sightseeing and the fact that we have to check out early tomorrow morning.

Final impressions from our first day in Jordan:

Next up:  Mt. Nebo and a float in the Dead Sea.

We continue our series on AmaWaterway's Secrets of Egypt & the Nile.   Click here to start from the...

AmaWaterways Egypt Secrets of Egypt & the Nile
Yesterday, we spent the day in transport from Cairo to Luxor via a short flight. But the traffic in...
Read more