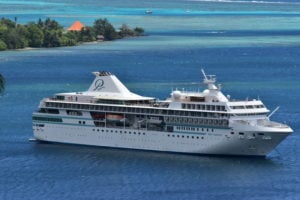 The Paul Gauguin holds no more than 330 passengers

We continue our series on our Paul Gauguin trip.  We spent three days pre-cruise in Moorea which you can read about here.  Then we took the ferry to Tahiti awaiting the Paul Gauguin for our 7 day cruise of the Society Islands.    The cruise starts in Tahiti since this is the island with the major airport and docking facilities.  But it really doesn't spend much time in Tahiti at all.  (By the way, starting in June of 2018, some Paul Gauguin cruises will spend a day in Tahiti Iti).

Paul Gauguin sticks to it's 3 pm embarkation time.  Since we had an hour or so to kill we walked across the street to a local pub with some folks we met standing in line.  Luckily, a Paul Gauguin porter checked our luggage for us.  In a bit of irony, we spent our last meal with same couple a week later.  But that's not really unusual aboard this ship. With only 330 people on board, the chances are good you'll find people you know.  As an example, during the week we saw this same couple many times at excursions, in restaurants, at bars, at the swimming pool and just up on deck enjoying the view.

The ship is designed for just one task - sailing the South Pacific.  It has a very shallow draft needed to navigate the coral rich islands without running aground.  The  back of the ship  opens to the ocean and becomes an on board watersports marina.  The size is just right - big enough to have three separate restaurants and on board lectures, but small enough that you will inevitably run into people you know.

Luxury - what is it?

Paul Gauguin describes itself as a luxury experience.  But what does luxury really mean?  When we sailed in March 2017, the ship was just a few weeks before a major refurbishment.  So we're sure the ship will look stunning after May 2017.  While the dry dock will do extensive renovations to the interior, they are not going to physically alter the ship.  The fitness room may get a  new floor, but won't change in size for example.  And the rest of the ship is very nice but probably no more luxurious than any other ship.  The ratio of physical space to passengers is excellent and as high as some other high end lines.  We didn't have to wait much in lines to be sure.  And the cabin is nicely appointed, though nothing special relative to other luxury brands. So physically the ship is very nice.

But the main thing that Paul Gauguin offers is service.  Their level of service exceeds any reasonable standard of luxury out there. 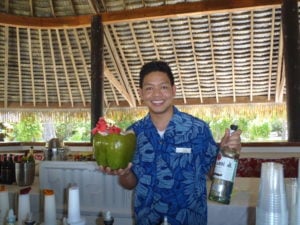 Service with a smile

Service - the definition of luxury

Here's some examples of how Paul Gauguin's level of service alone makes them a luxury product.  As many of you know I have a severe rosemary allergy as well as a need to avoid gluten.  No one has done a better job of dealing with this than Paul Gauguin.  Not AmaWaterways, not Uniworld, not Oceania, not Silversea, not Crystal, not high end restaurants.  Each and every meal, the waiter was told of my allergies before we sat down.  And at every meal I was proactively offered gluten free bread.  At every buffet the head waiter or chef walked me through the choices to identify problem foods.  Christian the head waiter not only knew me by name on the first day, but doted over me to make sure each dining experience was flawless - and it was.

A third example of excellent service on the Paul Gauguin is our housekeeper Rona.  During the stay she took care of our numerous requests - from extra water, to adding a top sheet under the duvet to changing to down pillows to extra towels.  She always knew when we had an excursion and were off the boat so she scheduled to make up our room only when we were off the ship.  Very thoughtful and helpful.  We made sure she knew that we used on our own dust mite pillow case and at the end of the cruise she made sure to take that pillow case off and lay it out so we wouldn't forget to pack it.

And come to think about it, we never had to ask to have fill up the ice bucket - it was always full before we ever needed it.  That's a first - we always seem to be running out of ice.  Finally, she was always bright and cheery and friendly whenever we saw her. 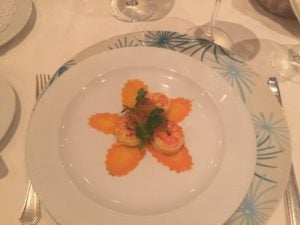 This really does look appetizing

Food: Paul Gauguin's food quality was excellent.  Just about every mean, the wait staff was there when before we needed them and the food was terrific.  And for the size ship, having three different restaurant choices is very good.   There was a choice of 6 wines with each meal (and many others were available for an up charge).

Amenities:  they feature L'Occitane products which are similar to other luxury lines.  The bedding and sheets were top notch, very comfortable and smooth.  I will say the towels were small and probably less absorbent than other luxury lines.  Bathrobes are provided, though that's not something we really use.

Seamlessness of trip:  Paul Gauguin gets very high marks for how easy the embarkation and disembarkation processes were.  We basically walked on to the ship, with no line, showed our passports and were escorted to our rooms - all within about 5 minutes.  The best embarkation I've ever experienced, regardless of ship size.  And at the end of the cruise, we had to be out of our rooms by 9:30 and off the ship by 10:00. So there was very little waiting.  At 9:50 we simply walked off the ship, found our luggage which was perfectly placed next to the ramp on the dock and found our ride.  Again, extremely easy.  The excursions were similarly easy with very little waiting.   Paul Gauguin does a great job of making the trip seamless.

What's included?  Another definition of luxury

A luxury cruise has most things included.  Paul Gauguin includes airfare (from LAX), an open bar and gratuities.  Plus if you use their flights, transfers to / from the airport are included. Further, if you book a pre or post extension (even if it's a day room), transfers are included.  Their specialty restaurants are fully included.  In room mini bar is included including bottled water.  What's not included?  Excursions, unlimited WIFI and the cost of pre or post cruise extensions. (which are included only on Regent).  But to me, Paul Gauguin's inclusions are right up there with other luxury brands.

As noted above,  embarkation was a breeze.  Our stateroom had ample storage space - several cabinets were still empty when we finished unpacking.  We walked the ship to familiarize ourselves after the must drill.  After the sail away party, we went to dinner and were seated at a table for two.  Which deserves extra mention - there are lots of tables for two which is also impressive.  We never were asked to be seated with others just to fill up a table.   We did enjoy meeting people throughout the cruise though.

The ship is very easy to navigate.  Our initial impression of the line was very favorable - great food, great service, easy to get on and unpack.  Is Paul Gauguin a luxury product?  Absolutely - great service, excellent food, seamless experience and very inclusive.  We had already adapted to the time change (and humidity) via our pre-cruise stay in Moorea so we could fully appreciate everything the ship offered right away.  The Paul Gauguin did not disappoint, even after we had stayed in an over water bungalow in Moorea.  Let the South Pacific adventure begin. 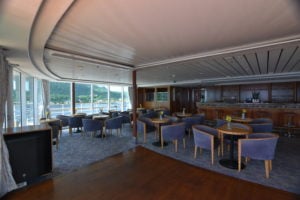 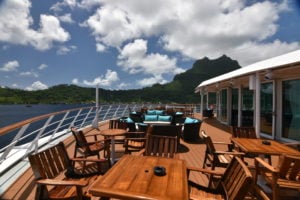 The top deck of the Paul Gauguin

Paris and Normandy - Wrap up

This posts wraps up our river cruise on AmaWaterways Paris and Normandy trip. See all of the Paris...

A beer themed river cruise has so many events we need two separate posts to fit them all in. Don't...