This post kicks off our series about our trip on Paul Gauguin's Tahiti & The Society Islands cruise.   It's titled " How much better can it get?" because I kept saying this over and over during the first few days.  So let me tell you why.

Moorea from the Tahiti ferry. Our first real view of French Polynesia

We decided to stay in Moorea three days before our cruise began on the Paul Gauguin.  We're staying at the Intercontinental Hotel, which is found on the North side of Moorea island - aka the sunny side.  If you've never heard about Paul Gauguin Cruises, it is a one ship operation that does the French Polynesian islands year round.  No other line knows French Polynesian better than Paul Gauguin cruises.  I consider it an alternative supplier as described in this post.  Our trip took place from March 14th to 26th 2017.  Later posts will describe will describe the ship and the cruise itself.

Logistics - how to get to Tahiti and Moorea

The flight from LA took a little over 8 hrs on Air Tahiti Nui.  For most trips to Tahiti, you really don't have much choice of airline.  There's nothing particularly noteworthy about Air Tahiti Nui other than to say the plane we flew was old enough to still have the ashtrays embedded in the arm rests!  If you can swing business class - do it because the seat pitch is not good back in coach.  The seats we had on our Southwest flight coming into LAX were much more comfortable.  Landing in Tahiti, we transferred to the ferry terminal and were given a small presentation by the local tourist office.  We decided to purchase a tour from them and we're very glad we did.  More on that in a later post.  The ferry ride from Tahiti to Moorea took about 30 minutes.  From there we transferred via van to our hotel.    So to summarize - we took off from LAX at about 11 pm, landed in Tahiti at 5:00 AM (three hour time difference) and arrived at our hotel by 8:30 AM.  We were greeted to 80 F weather.  Awesome!

How much better can it get - part 1 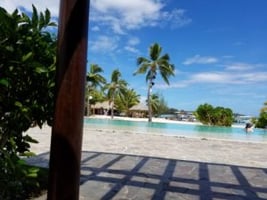 A few hours after landing, a view from the Intercontinental Moorea pool deck.

Our room wasn't ready so they gave us a transit room - basically a small room with a shower and changing area.  That shower felt great!  We changed into our swimsuits and trundled off to the pool area.   There are two pools.  There's a large curved infinity pool adjacent to the beach.  Water temperature?  Perfect.  Swim up bar?  Check.  View of the Ocean?  Absolutely.  Comfy lounge chairs under shade?  Yes, see the picture above.  We ate lunch right out by the pool in a small seating area under cover.  It became hard to believe that we were only in LA a half day ago.   The sun was hot but the breeze keeps you feeling cool.  By mid afternoon we were having a Mojito waste deep in a beautiful infinity pool looking out over a very blue Pacific lagoon.  Clouds rolled by and quickly yielded to more sunshine.  Ahh, Moorea.  How much better can it get than relaxing in the pool just hours after landing in the South Pacific, drink in hand?

How much better can it get - part 2

A view from our table and chairs on Moorea's over water bungalow. 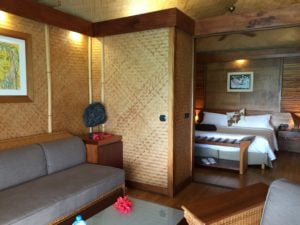 When we got into our over water bungalow we saw just how much better it could get.  One room consists of a large bedroom, with over-sized bath room.   It has a large living area, with desk, comfy reading chair and sofa / bed. Both rooms are decorated in woven wood on the walls and ceiling, wood planked floors and overhead fans.  But then you go outside and you see a very large deck extending over the water.  Half the deck is covered with a table, chairs and privacy wall and the other half is open with two large, padded lounge chairs.  By late afternoon we were in our deck chairs, looking out over a beautiful blue water.  The hotel (and  in fact most of the island) is circled by coral reefs which create a very large lagoon.  How much better can it get than having your own private view of the lagoon? 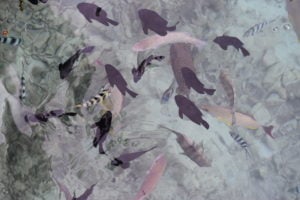 It's dark, but you can see the fish going for the bread. This is right outside our deck.

How much better can it get - part 3

Ok, so the view from the pool was great and the view from our deck was great.  In the evening, there's lights under the deck so you can see the fish.  Did I mention that not only are you over the lagoon but that there's plenty of coral right along shore which means there's plenty of fish right by the bungalow?  So we throw a few breadcrumbs into the water and watch the show of fish.  It's like having your own aquarium - except the fish are large, endless and ever changing. And it's the real deal - Moorea is much better than glass enclosed tank with artificial light and circulation.  How much better can it get than having your own outdoor aquarium?

Does it get better?

The answer is...it DOES get better.  But for that you'll have to wait for the next post.

The Paul Gauguin will visit Moorea again later in the week.  In fact we see the ship come into Moorea on Thursday and see her leave to go to Tahiti on Friday evening.  The Intercontinental Moorea is a beautiful resort with several restaurants and it attracts an international crowd - much French is spoken.  So we'll describe more about the island of Moorea in the next post and then we'll discuss the cruise ship itself.  We can't wait. 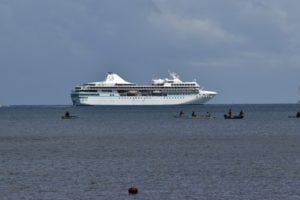 The Paul Gauguin in Moorea

This is the second in our Paul Gauguin cruise series.  The previous post was called "It can't get...