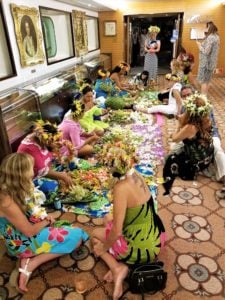 Polynesian night aboard the Paul Gauguin. Locals teaching passengers how to make flower headdress and lei

This continues our series on our Paul Gauguin cruise in the South Pacific. Today we focus on our sightseeing day in Moorea.

Since we had been in Moorea pre cruise, we were pretty familiar with the North side of the island.  So we decided to rent a car and drive around the entire island.  This also gave us an opportunity to check out some of the other hotels that our clients might be interested in. 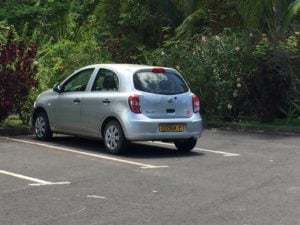 Our rental car in Moorea

We had made prior arrangements with Albert Transport to rent a car.  William, one of the Albert brothers, picked us up at the pier as soon as we arrived via tender.  He drove us to the rental facility about 10 minutes away.  It's just across the street from the Intercontinental Hotel.  While on the dock we ran into a couple that wanted to rent a car but found out that everything was booked up.  Turns out Albert only has 20 cars on the entire island and only 5 at our location.  Not sure how many Avis has. But with all the hotels on the island plus the Paul Gauguin in port, cars are in demand.  Best to reserve ahead of time.

The car was a small Nissan.  It had lots of exterior damage (like the front end was screwed on the car body) which I pointed out to the attendant who dutifully wrote it down.  They were very nice and showed us how the car worked including how to lock it up.  We decided to drive around the island's south side since we hadn't gotten a chance to see that portion on our pre cruise stay.  It's easy to drive the roads - the top speed is 40 mph (60 km/hr) and roads are in good shape.  There's a few shops and view points scattered around this part of the island but really not much. Sightseeing was easy in the car.

Sofitel Moorea over water bungalows as seen from the restaurant deck

It takes about 90 minutes to circumnavigate Moorea (with no stops).  We decided to check out a few of the good hotels along the way.  Our first stop was the Sofitel Moorea la Ora Beach Resort.  This is the closest resort to the ferry terminal to Tahiti and is only 5 minutes from the airport.  This is on a very nice beach front property.   We saw some really nice bungalows including one that could accommodate two families.  The bungalows are spacious, luxurious and are both beach and over water.  The pool was not much to speak of though.  The resort attracts a lot of Italian guests according to hotel staff.  The over water bungalows are very high off the water and many face toward another bungalow.  Clearly a 5 star hotel but this is not for everyone.

Right after we left the resort, there was a scenic overlook on the road so we stopped for pictures.  Sightseeing at its finest, the stop provided a nice view of the Sofitel property and environs.  Next it was time for lunch so we headed over to Snack Mahana based on the recommendation from Albert Transport.  It's located just past Opunohu Bay about 20 minutes away from the Sofitel.  It was very busy when we got there and we waited about 10 minutes to be seated.  It's located right on the beach with tables scattered around the property. Definitely laid back atmosphere.   We had a fish burger - basically a large piece of tuna - and mahi mahi platter with pepper sauce.  Remember to purchase a large bottle of water when ordering if you want to keep your water glass filled.  An excellent recommendation.  Don't go though if you're in a rush.

Over water bungalow at the Hilton Moorea

After lunch we headed to the Hilton.   This hotel is situated in between the two bays on the north shore and therefore gets both sunrise and sunsets.  The hotel offers both beach bungalows and over water bungalows.  The arrangement of over water bungalows is such that only some are truly private as most look out into another bungalow.  Also a very nice property and beach which includes an over water crepes bar as well as two restaurants.

We will have more to say about the Hilton and Sofitel properties relative to the Intercontinental Moorea in a later post.  Stay tuned.

We next headed back to the west side of the island as we had seen some nice shops to stop in.  We purchased some gifts at a local store where the owner was from France.  This seems pretty common based on our observation.  She was very nice and directed us down the street when we asked about purchasing vanilla.  We found the vanilla in a small grocery store, nicely packaged for export.  By the way, it was no problem getting through US customs with the vanilla. We declared it on the form but customs agents in LA just waved us through.

We headed back to return the car and were promptly driven back to the pier.  Many shop owners set up little stands on the pier for the convenience of the cruise passengers.  We found that the prices and selection on the pier were consistent with the prices we found on the island itself.  So if you find something you're looking for on the pier, don't be afraid to purchase it.  There were a nice variety of things to purchase - including vanilla as it turns out.  Our tender came within a few minutes and we were back on the ship.

Dinner and a show

This evening was Polynesian night where all restaurants have the same menu.  Further, the show that night features Polynesian dancers. We had seen a similar show at the Intercontinental Moorea pre-cruise (except it included fire dancing - not allowed on the ship).  Basically the women move their hips with incredible dexterity and speed while the men emulate warriors in dance and chant.  The Polynesian culture is certainly interesting and very different than what we are used to.  It was fun to watch and experience. 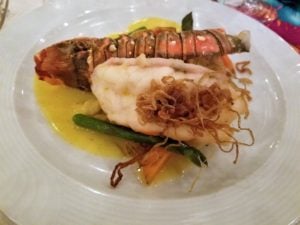 The Polynesian show on board was truly interesting. This shows the men in mock warfare mode.

This post about the private island continues our series aboard the Paul Gauguin cruise leaving...