This continues our series documenting the Paul Gauguin cruise through the South Pacific.  Read about our surprise encounter with sharks.

Let's review where we've been so far.

Which brings us to Bora Bora.  This is another beautiful island, similar to Moorea.  But Bora Bora's claim to fame is that there is only one opening in the barrier coral reef separating the lagoon from the ocean.  As a result the lagoon is simply beautiful and hosts some great underwater activities.  And that's why we snorkeled both days in Bora Bora.

Bora Bora from our excursion boat

We attended an on board lecture given by a marine biologist.  Very interesting.  It focused on efforts to restore the coral to the various islands.  And the restoration wasn't in response to global warming.  Rather it was in response to several typhoons which had done significant damage to the reefs.  But even more damage was done by an outbreak of the crown of thorns starfish.  Read more about it here.   So research is conducted to see how to make the coral grow faster.  The solution is called "Bio rock" which basically sends a very slight electrical charge through a grid that the coral are attached.  There's a little bit more information on their website.

What's really interesting here is that the research is being partially sponsored by the big hotel chains.  Bora Bora's other claim to fame is the many high end resorts (each with over water bungalows) ringing the island.  So they have a financial interest in ensuring coral growth.

One of the excursions Paul Gauguin offered is called Eco snorkeling.  Sounded interesting so we signed up for this on our first morning in Bora Bora.  Great.  Took the tender over, reported into the Paul Gauguin excursion manager.  Turns out there's only one other couple that signed up.  Great!  Except.....there was a snafu and the tour operator never showed up.  Many apologies from Paul Gauguin but nothing to be done.  Except......we remembered that we had also signed up for an excursion the next day in Bora Bora and we wondered if we could just switch to that one.

Pia, the excursion manager, hurried over to that operator to see if the switch could be done.  YES - they had two extra seats available and we hopped into the boat.  Crisis averted!  Great job by Pia getting us those last two seats.  You can also see the value of using the ship's excursions (vs booking them independently). 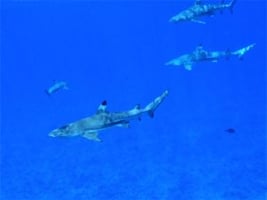 Finally snorkeling ...but what did we sign up for?

Turns out we were on the Sharks and Sting Ray excursion.  This entailed three stops - one to see sharks, the second to see stingrays and the third to snorkel in the "coral gardens".   There were a total of  12 people in the boat - 5 other couples.   The shark stop was just outside of the lagoon so we headed out to the ocean.  We had no idea what to expect.  Our guide on the boat was terrific.

When we jumped into the water, we found that he had brought some dead sardines to feed the sharks with.  Soon, we were seeing loads of black tip sharks.  The sharks were about 4 - 5 ft long and fierce  looking enough to make you think twice about being in the water with them. Here's some information on the black tip sharks.  But they were much more interested in the sardines than in us.  Our guide did a great job of showing us the sharks in full glory. 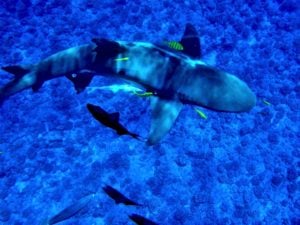 Then he "called" over the lemon sharks.  (strictly a learned behavior - fish and shark both come over when food is free).  If I felt uncomfortable with the black tip sharks, I felt trepidation with the Lemon sharks.  They were circling us (the whole group) and they are big - 8 to 10 ft long.  Check out this article on lemon sharks.   What was amazing is that our guide fed them, swam with them, and touched their undersides.  Amazing stuff as these are truly wild creatures capable of destroying a human in heartbeat.  It was thrilling to be this close to the sharks.

It's hard to highlight any particular part of our vacation as "the best part" but swimming with the sharks absolutely was the highlight for me.  These creatures are fascinating to watch, terrifying to think about and awe inspiring to swim near.  Almost all had remoras swimming next to / on them and bright yellow pilot fish swimming ahead of them.  They are graceful.  But watching them bear their teeth is simply frightening.  What a great thrill...WOW!

Sting rays all over the place

Once we caught our breath from the sharks, we headed inside the lagoon to a sand bar.  We put on aqua socks / water shoes and stepped off the boat.  Immediately we were surrounded by sting rays.  Some where quite large - at least 10 ft from head to tail.  These are fascinating creatures and just as prehistoric looking as can be imagined.  They come up to you and rub against your legs quite unexpectedly.  It was a little unnerving at first.  They don't seem to mind being touched - in fact the seem to enjoy it.

Once you get the guts to reach out and touch one with your hand, you realize they feel like a wet mushroom.  That's the best description I've heard of it.  A ray can be swimming along and then all of a sudden stop, flick up some sand from the bottom, turn around a little bit and then head off.  Looking for food but just very funny to see.  But very graceful looking when they swim.  Overall a very neat experience which the stingrays seem to actually enjoy. Here's an interesting article about stingrays that seems to fit our observations (it's a different type of stingray though). 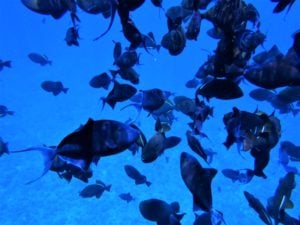 Loads of fish in the coral reef of Bora Bora

Our third stop was to the coral gardens (just a reef) located in the lagoon pretty close to shore.  Great fish and very interesting coral. Our highlight in this segment was watching a Morey eel move from one part of the reef to another.  In the Caribbean we've seen Morey eels, but only their heads sticking out of the reefs. This was the first time we saw the entire length swimming around.  A little creepy, but fascinating.  Click to watch the Morey Eel movie.  And the reef was full of fish - parrot fish, angel fish, triggers, wrasse, puffer fish, sargent majors, and many more.  Lots of colors, lots of movement.

Dining on the ship

The Shark and Sting Ray encounter will stand out as one of the best excursions we've ever taken.   The waters were crystal clear and filled with fish, rays and sharks.  Very thrilling indeed.  The guide was great - kudos to Paul Gauguin for picking a great operator.

We went back to the ship and relaxed the rest of the day.  We filled the time with a little work (a travel agent is never really off duty), uploading pictures to Facebook and off our camera cards.  This was our first dinner outside the main restaurant. The way Paul Gauguin works is that there are three main restaurants (all included).  The main restaurant L'Etoile changes menus every day.  It is open for dinner only.  You can arrive anytime and be seated either by yourselves or at a larger table.

We had made reservations at La Veranda and had another exceptional meal.  As previously mentioned in this post, we felt the food was very good on this cruise. Certainly comparable to other luxury and premium brands we've experienced.  You can choose (mix and match style) from a Jean - Peirre Vigato created menu or from the a la carte menu.  So this is what it's like to eat at a Michelin starred restaurant!  Very French to be sure.  We had a great meal - even the gluten free choices were amazing.

We over-night in Bora Bora. And why not?  There's still so much more we want to do. The ship runs about 30 different excursions here so you know there's much more.  We can't wait to go back tomorrow. 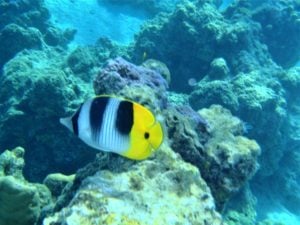 Lots of colors in Bora Bora

This is the first in our series about AmaWaterway’s Taste of Bordeaux river cruise. This...

This continues our series on our Paul Gauguin cruise.  To catch up, start here.  Read on to learn...