This post about the private island continues our series aboard the Paul Gauguin cruise leaving Tahiti.  Click here to start the series and here to go to the previous post on Huahine. 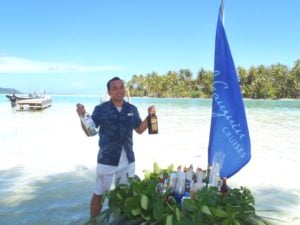 Many cruise lines tout their "private island".  But sometimes the "island" is just a sliver of beach front property that they've leased.  Not so in Paul Gauguin's case.  Today we spent a day on the beach in a truly private island.  After a short tender ride, you arrive on the dock.  Except the dock ends before the beach so you go from dock to water to the beach.  Since the water is always warm and not to deep (a couple of feet) this is not a problem.  Unless....

If you don't wear aqua socks, you could have a problem with the water landing.  The sand is full of coral. And coral is really sharp.   Actually we were glad we wore our water shoes the entire day since the beach was also full of coral.  One fellow was playing volleyball on the beach in bare feet.  He ended up with coral embedded in his foot which needed extensive cleaning out (it hurt!).  When we entered the water, we also were glad we had our water shoes on because it was filled with sea cucumbers.  These are ugly bottom dwelling creatures that I really didn't want to step on in bare feet.  So for goodness sake, wear water shoes. 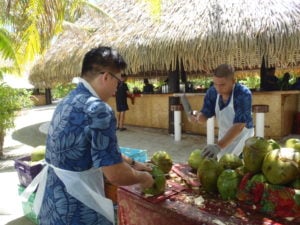 So what the heck is this place and is it really a private island?  Right off the island of Taha'a is an even smaller island called a motu.  On Motu Mahana you'll find that Paul Gauguin has a very nice set up.  Come ashore and you'll be greeted with a freshly cut coconut with a straw. Coconut water anyone?  There's lounge chairs and palm trees everywhere. To your right, there's a bar set up in a wood thatched hut.  Not just a little beach bar but a fully stocked, fully capable bar with top shelf liquor.

A little behind the bar is what will turn into a restaurant, complete with grills. They are just setting it up when you first arrive but in about an hour it will come alive with some great smells.  Further back are the rest rooms - fully functioning and probably the only thing on the island with running water.  There's a small floating bar in the water by the swimming area.  And there's a couple of tables up front used for the various demonstrations during the day (coconut opening, pareo tying, singing, cooking demonstrations).

Once you get your bearings, you realize your first task is to find a place to set up - some chairs and a small table.  Don't do what we did initially.  We found a nice spot under a palm tree with a great view of the lagoon - the water sports (swimming, kayaking) were right in front of us.  We sat down for a few minutes enjoying the warmth.  Then some folks we had met earlier saw us and suggested we change locations.  Boy were they right.  We moved to the other side of the island (probably only 100 ft away). There we found a nice steady breeze.  What a relief.  Later in the day, we walked near our original spot and it was unbearably hot.  So do yourself a favor and get some chairs on the breezy side of this very private island.

It's all about the water

You can see lots of fish right off the motu

The views from the motu are stunning.  Tropical breezes swaying the palm trees on land.  And the sea reflected just about every shade of blue imaginable.  The lagoon is very shallow for a very long way out on one side.  On the other side, the water deepens to reveal a very nice coral reef. This is a private island in every sense of the word.  Music (by the ship's entertainment staff) is playing in the background.  It's just about as relaxing as you can imagine.  Sit back, relax, maybe read a little.  But then you start warming up a bit and that blue ocean is so inviting.  So you start thinking - let's get in the water.  We tried snorkeling first.

Another couple we had met on board had been to this island before. They advised us not to bring our snorkel flippers since there was sufficient current that we could just float snorkel.  This was a mistake. The snorkeling was good enough but the lack of flippers made it hard to maneuver.  This is not the best snorkeling you'll see but it was still satisfying.  There's a lot of sea cucumbers when you enter the water.   I'd much rather have floated over them with my flippers on.  After enjoying the coral and fish for a while we came ashore.  The water is so clear and so comfortable, it was hard to pull ourselves out.

It's all about the food

Lo and behold we found it was lunch time.  We grabbed some food and joined a table.  It was as if the staff had moved the entire ship's galley over to the island.  There was a complete selection of salads and meats including hamburger, sausages, chicken, pork and mahi mahi.  There was lots of poison cru - which is basically Tahitian ceviche.  As usual the food was terrific.  We grabbed a table and met two very interesting couples.  One, from New Hampshire had been on something like 27 cruises.  The other, much quieter were from England and were enjoying their first Paul Gauguin cruise.  Over the ensuing week, we kept running into the couple from England and truly enjoyed their company.    That's one of the nice things with a cruise this size - you can run into people you want to keep in touch with pretty easily.  And one of the nice things with the private island - it was easy to meet new people but also find folks you've already met. 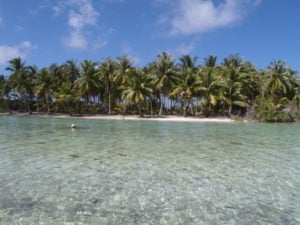 It's all about the private island

So after lunch we chatted, went into the water, got back to our chairs and did some more relaxing. Hard work!  But really that's what this place is all about.  Kicking back and enjoying yourself.  We did a quick walk around the island as well.  But mostly after lunch we lounged, did some more reading and generally relaxed.  No stress.  Indeed it was fun to see how other people were relaxing - some slept, some walked half a mile into the lagoon but only knee deep in water, others played volleyball, some kayaked, many swam, some people drank, some watched the entertainment, while others did a little shopping at a small boutique table.  Take your pick.  On the motu, you can decide what you want to do.

Back to the ship

We decided we had enough paradise for one day and headed back to the ship.  A short wait in the water for the tender later, we were back in the confines of our room to clean up.  Looking back out at the motu from the ship you could really see how much of a private island it is.   By the time we were finished showering,  the shadows were getting longer so we went up on deck to mix, mingle and chat.  Besides it was cocktail time.  Then it was dinner time.  We never made it to the show that night; we stayed in our room and were asleep by 11 pm.  All that relaxing was apparently tiring.  The sun and the swimming probably didn't help either!

So that's the private island.  A definite beach day.  A day for relaxation. It felt good to soak up the South Pacific sun and snorkel in the reef.  The air conditioning is very nice at night for sleeping but it's hard to beat the fresh air breeze and warm blue waters during the day.  Tomorrow we venture off to Bora Bora.  Read about those adventures here.