Today we stopped at Huahine, a small island in the Society Islands.  We booked the Huahine Safari Expedition from the ship which was basically a tour of the island in the back of a 4 x 4 truck. There's not much on the island other than beautiful surroundings.  But we booked this excursion primarily to learn about pearls and pearl farming and get a little culture beside.

The view from the bridge connecting two islands in Huahine

A museum dedicated to the marae

After a short tender ride, we boarded the back of a 4 x 4 with two other couples.  Stop for a moment. When was the last time your excursion had a total of 6 people?  Very nice indeed.  One couple was from Australia celebrating a birthday and the other from Houston.  Our first stop was a bridge connecting two portions of the island built by the French army in the 1960's.  For some reason, the driver had us walk across the bridge for better photo opportunities.  Not quite sure why but it's always great to take things a little slowly.  Huahine is the very definition of tropical with very lush forest everywhere - life just goes slowly here.

We then drove through the island a bit with the driver describing the islands' history and culture.  We stopped at a sacred site called Maeva which is a very important marae or temple.  There's over 240 marae on the island. Each was the site of a human sacrifice the last of which was in 1900. The local Queen stopped this practice once her son became a victim.  But the practice had been going on for hundreds of years and interestingly well after the island was Christianized.  There's a small museum to wonder through.  Walking through the marae and museum you definitely get a sense that of what life was like here before western civilization invaded.  Perhaps Indian Jones movies weren't that far off?

Fishing and the beach

A traditional fish trap in a Huahine lagoon

We drove through a small town so we could see where the present day people live and shop.  It consisted of two streets and certainly no traffic lights or stop signs.  We continued driving till we saw a fish trap.  I found this ingenious.  Basically it was a long stone enclosure that trapped fish during low tides.  As the tide went out, water levels dropped and the fish found themselves with no place to exit.  It shows the level of patience needed which seems appropriate for the hot humid conditions.  Sure enough, there were plenty of fish swimming in the fish trap when we visited.

Next, we drove to the beach and got out for a look around.  Basically it was a South Pacific beach with lots of sand but lots of sharp coral and drift wood.  Glad we had our sandals on.  A nice sea breeze blew and it was very pleasant.  Not sure it warranted  a special stop, but then again, there's nothing wrong with a little beach time.  And it does emphasize how much the locals depend on the ocean. When you live on a small tropical island, the ocean is your life. 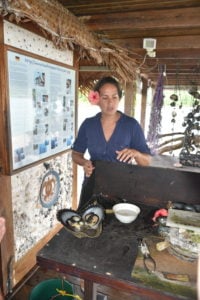 Probably the highlight of the trip, and the reason we chose it in the first place, was a visit to a Pearl farm. The pearl farm is in the middle of a lagoon so you need to go in outrigger canoe. Its a short trip out.  The brief presentation about the process of pearl farming was quite interesting. You can read more about it here.  A better explanation of pearl cultivation is provided here.   This is also useful to read in preparation for your trip since pearl prices are a direct function of quality ratings which are described in this source as well.  In the case of  the pearl farm in Huahine, they used Japanese techniques and grafts.  About 50% of the oysters reject their graft and once rejected will never produce a pearl and are sold for food.  We never realized how much cultivation and grafting is involved.  The shop is small and just like in all of French Polynesia, there's no pressure to purchase.  You'll see pearls in every town and every island.  Our advice is to take your time and find what you want.   Prices appear to be pretty much the same everywhere you go.

After the pearl farm we headed back to the jeep and stopped at a small stream to look at the "famed blue - eyed eels".  This was actually a pretty bizarre scene.  A guide fed the eels on the side of the stream which was reinforced with concrete so it looked more like a small canal.  The eels were furiously jumping out of the water to eat.  We certainly couldn't tell what color the eels eyes were and the sight of several large eels jumping out of the water was somewhere between frightening and gross.  But it was interesting nonetheless.

Finally, we drove up the hill and stopped at an overlook affording beautiful views of the bay beneath us.  The pictures speak for themselves.

A day in Huahine

This was a pretty sedate tour but we got to meet several very nice couples, we learned about pearls and pearl farming as well as some Polynesian culture.  So mission accomplished.  After this, the rest of the trip was about the water.  But we wanted to do at least one cultural type excursion.  Back on the ship we had a great lunch and basically relaxed on the pool deck the rest of the afternoon.  The ship left a few minutes before 5 pm and off we went to another exciting island.  You can see the next post here.

Paul Gauguin cruise - Moorea day at the Intercontinental (10 of 11)

This continues our series about our Paul Gauguin cruise.  If you missed the rest, start reading here

This completes our series on the Paul Gauguin cruise of French Polynesia. The cruise is called...