We begin today in Petra and end in the desert.  This is our third day of our extension in Jordan as part of the AmaWaterways Secrets of the Nile & Egypt.  Here's our first and second days if you want to catch up. 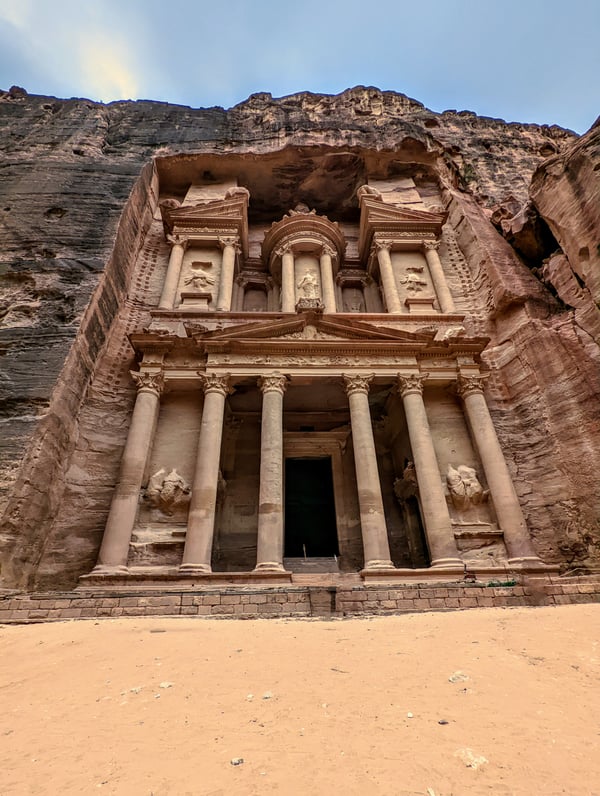 The Treasury of Petra.  This was actually a tomb, but originally people thought it contained great treasurers of ancient civilizations.

Our hotel, the Movenpick is literally across the street from the entrance to Petra.  Petra is the site of a very well preserved 1st century BC and AD civilization that lived in the rocks.  Yes- in the rocks: they dug caves in the rocks, worshiped gods carved in the rocks, dug tombs in the rocks, carved passages through the rocks and managed water around the rocks. There's a long and at times narrow crevice in the rock formation that we walk through.  Along the way there's plenty of caves and monuments carved into the stone. This is sandstone so it's easily sculpted.  Petra was a key trading post because it was midway between Wadi Rum (see below) and points North (the Dead Sea / Jordan river valley, Amman and Damascus and eventually to Asia Minor/Turkey).    Petra was the center of the Nabatean civilization and the secret to their success was their ability to control and manage water. The gorge could be easily flooded when it rained. As we walked the path, we could easily see gutters or channels that were carved into the rock on both sides. This ensured safety for it's citizens.  They event had sand traps built into the channel for easy cleaning.  And trade made Petra the richest civilization in the area.

Walking through the canyon was fascinating just looking at the rock formation, let alone the human elements. But in an opening along the main trail the view of the Treasury is truly striking.  This is where Indiana Jones was filmed. Seeing it in person is truly an experience. The red rock carvings are both intricate in detail and huge in scale. It's in a box canyon, so it's protected from the elements and therefore well preserved.  Seeing columns and sculptures and entry gates carved into solid rock, after walking through the natural roughness of the slot canyon is quite the  juxtaposition.  Absolutely fabulous to see.  We walked beyond the Treasury, which is the major draw, to an area known as the Tombs. From here we climbed up one side of the canyon (aided by random stairs) to look at a collection of caves.  We had great views of the amphitheater (self descriptive), the trail far below, grazing areas for goats and of course lots of neat rock formations. Once we climbed down we crossed the trail to follow a very long set of stairs up the other side of the canyon.  We were treated with more spectacular views.

The walk back was uphill and it certainly seemed steeper going up then it was coming down four hours before.  It went relatively quickly as we weren't with the large the group.   The walk back was just as interesting as walking in because the view was totally different, as was the light filtering into the canyon.   We passed remnants of the Roman road going through the canyon; the Romans wanted to take over the lucrative trade developed by the Nabateans.  We realized that we could have easily explored Petra for days on end.  But it was time to leave, so after a buffet lunch at a nearby restaurant, we were off again. 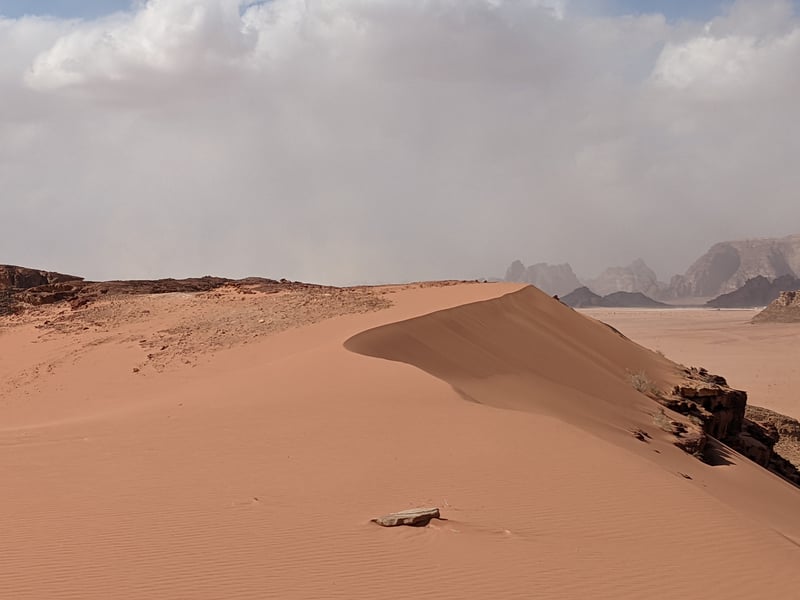 Sand dunes of Wadi Rum. There's a reason it's been the setting for films about Mars.

After a few hour bus ride, we arrived at Wadi Rum for what was described as a Jeep tour.  Wadi Rum is a national protected area at the end of the Saudi desert.  It's been occupied since the 8th century BC and was an important stopping point for the trade routes.  Back in the day, by camel,  it was about a 40 day journey from the port of Aqaba and it was about half way to Petra, the major trading center in the Middle East.  In ancient times, Wadi Rum's fame was due to several springs that provided much needed water.  And hence a trading post and stopover point was born.  In modern times, Wadi Rum is famous for the setting of the film Lawrence of Arabia based on the Seven Pillars of Wisdom book by T E Lawrence.  The visitor center is located with a great view of the rock formation called the Seven Pillars of Wisdom.

But what is Wadi Rum?  Its  endless desert.  Huge sand dunes, miles of open space, lots of sandstone and granite  rock formations.  Our Jeep ride was really sitting in the back of a pick up truck. And while it didn't sound particularly great at first, it was fantastic.  The combination of driving across the desert, wind and sand flying everywhere was terrific.  Climbing up the dunes, exploring rock formations,  looking at camels, stopping for tea at a Bedouin tent was both unique and fun.  At one of the stops we viewed  petroglyphs of a hunt - showing camels, hunting dogs and hunters.  The drawing was very clear and very well preserved and likely about 12,000 years old.  The day we were there was particularly windy and so dust was flying everywhere.  We had to be fully covered in order to see and not be pelted by sand. You could easily see how the Arabic outfits and scarves evolved.   Our last stop was at a large campground compound where we had dinner in a tent. The meal was cooked in a traditional desert fashion - underground and slowly cooked over charcoal. The lamb and chicken was  super tender and we had a great time. 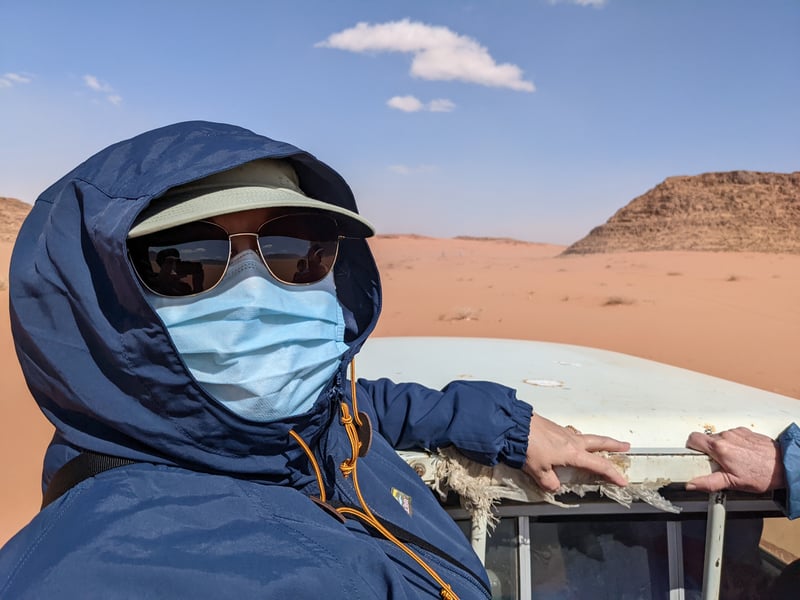 Everything had to be covered up on our Jeep ride to avoid a sun blasted face.

We left the ancient worlds of Luxor early in the morning for a flight to Cairo.  After landing we...