Our previous day's adventures in Croatia and Serbia can be found here.   After leaving Novi Sad, we arrive in Belgrade a city of about 2 million people.

The morning tour of Belgrade:

We take a walk to the Kalemedgan fortress. Though very close to the ship's docking point, it's up several very steep hills. In fact the first thing you lear about Belgrade is that it's built on many hills.  This fortress overlooks the confluence of the two rivers that serve lBelgrade - the Danube and the Sava rivers.   The fortress is part park, part scenic overlook and  part museum of the bygone era of building forts at strategic places along the river.  The photograph above  shows several watch towers seen throughout the complex.  It's very large and is best described here.

From the fortress we walked along the main pedestrian shopping districts, shown above.  Lots of local shops but including a very modern multi-story mall.  Next we went on a bus tour of the city which ended at St Sava Cathedral

The outside of the cathedral is very mosque like. It's only recently completed and sits high above most of Belgrade.  It's orthodox Christian of course. Each country has their own patriarch so the Serbian Orthodox Church is independent of other orthodox churches.  This is obvious in the exterior architecture, but also in the interior which is ornately decorated in mosaics and inlaid marble as seen in the above photos.  The result is striking.  The cathedral is very large - it can hold 15,000, though they stand during the services.

Serbia in the afternoon 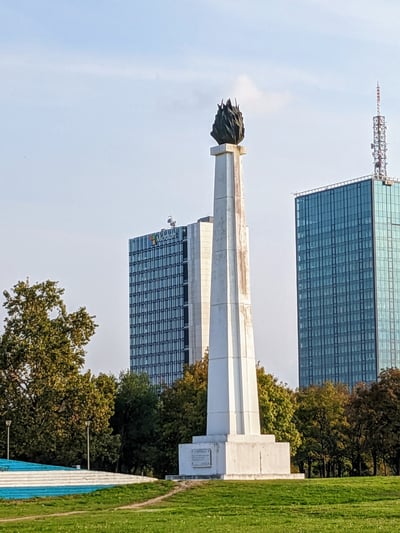 AmaWaterways offered afternoon tours  to Tito's palace and memorial and for a brandy tasting adventure.  Instead, one of us went on a bicycle tour.  We crossed the Save river bridge and found ourselves in "New Belgrade".  Basically we cycled around a very large park, to the confluence of two rivers.  We passed the giant Non-Aligned nations building, numerous office buildings, a former top luxurious hotel of the communist era, lots of apartment buildings and a memorial to those killed in the NATO bombings.(shown above).  The river bank was lined with bars and cafe's, many on stationary boats but many others on permanent structure. The night life must be very lively indeed.  It's a fun and easy bike ride. Enough to loosen up for an afternoon workout in the gym located at the rear of the boat.  And of course, there's plenty of time to prepare for another fantastic meal.

The overt  display of religion, open speech and consumerism of today's Belgrade are a stark contrast to the repression communist past.

When should you book your river cruise?

Wondering when to book a river cruise? Since river cruising has increased in popularity I am...

Will I have time on my own?

Will I have time on my own?  This is a very common question for those that have not taken a river...