Our first two days on the AmaBella is described here.  Today , October 12th 2022 we arrive in Croatia. 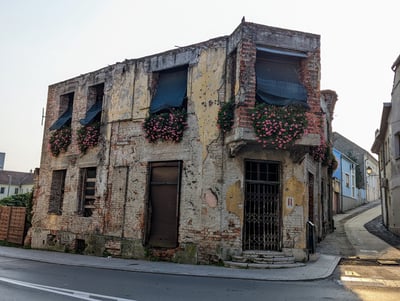 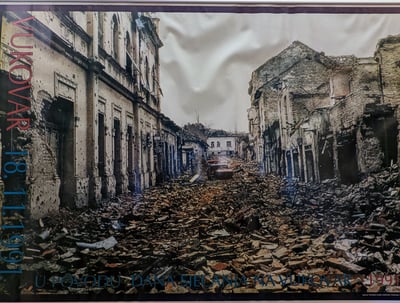 Vukovar in Croatia was a town near the Serbian border that suffered near total destruction during the Serbian revolt in 1991 which happened amid the dissolution of Yugoslavia.  Before the war,  Vukovar was about 30% Serbian with about 70,000 inhabitants.  Nearly all left town with only about 30,000 inhabitants today.  The State has invested some monies to rebuild much of the town but much work still remains.  We meandered through the streets, both admiring the restoration down so far and amazed at how many lives and how much property had been lost forever.  Part of the downtown has been revitalized as seen in the photos below and life goes on.been lost forever.  We also spent time at Eltz castle, restored 17th century palace that now is the home to a museum dedicated to Vukovar's and the Eltz family history

The main street in Vukovar today (early on a weekday) 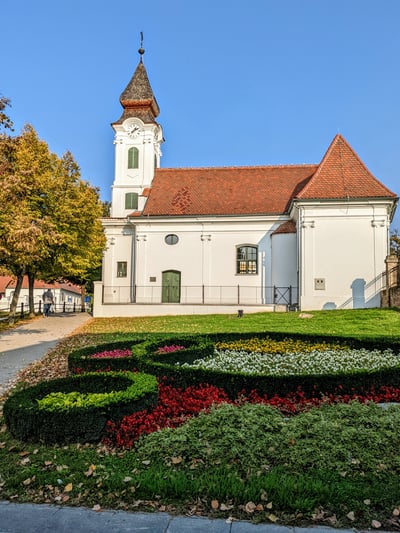 We next went on a quick bus ride to the Ovcara memorial. This modern exhibit lies amidst a large cow farm as this is where many of the shallow graves was found; these are the last Croatian fighters that were left in the city when taken over by the Serbian rebels.  Photos of all the victims slowly appear and disappear on the walls of the circular memorial.  This water tower has become a symbol of Vukovar - the Serbs were never quite able to capture the flag flown on top.  It stands today as a an ever-present remembrance of those tragic days. When we ask our Croatian guide about relations between teh serbs and Croatians today, she spoke of segregation. Vukovar is still 30% Serbian, she says so really nothing changed except death and destruction.  Her answer as to why there was so much hatred stemmed from feelings of repression.

During lunch the ship motors downstream to Novi Sad, Serbia.  We go on a walking tour of the very modern and lively town.   The mood here is decidedly upbeat relative to Vukovar.  The guides speak that many Serbs refused to fight against the Croatians and that many families are of "mixed marriage" - either the wife or husband of either Serbian or Croatian descent.  Signage on the buildings have 5 different languages, denoting a type of inclusiveness that was certainly not apparent in our visit to Croatia.  After the walking tour we have a chance to walk around town. Lots of people with young children sitting in teh cafe's (or bars) virtually of them at outdoor tables.  Below you can see some picture of Novi Sad during the day - lots of shops, lots of people, some history and lots of cafes. 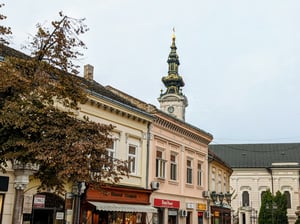 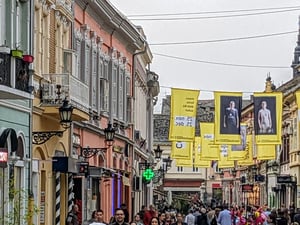 Traveling to Europe - is this a good time?

Thinking of traveling to Europe?  We all read or hear about terrorist activities around the world....