We continue into Bulgaria today.  Our previous blog, describing the passage through the Iron Gates Gorge is here.   Today we are in Vidin.  AmaWaterways describes Vidin as "an extremely off the beaten path destination" and sure enough, that's what it is.

We decided on the Vidin Walking tour.  Some others chose the Belogradchik hike while others tried their hand at the Pastry and yogurt tasting tour.  While there's always a choice, I thought I'd highlight these since they represent the types of choices AmaWaterways typically provides. First, there's always the town walking tour. This provides highlights and an overview.  Next, there's typically a more active hike and/or a nearby place of interest. We typically take these if we've been to the destination before or just need to do something different.  Finally there's typically a special interest tour - in this case food related.

We walked through Vidin along the water front (see photo above) which was separated from the Danube by a double stone wall.  The wall was part of the Baba Vida Fortress system. 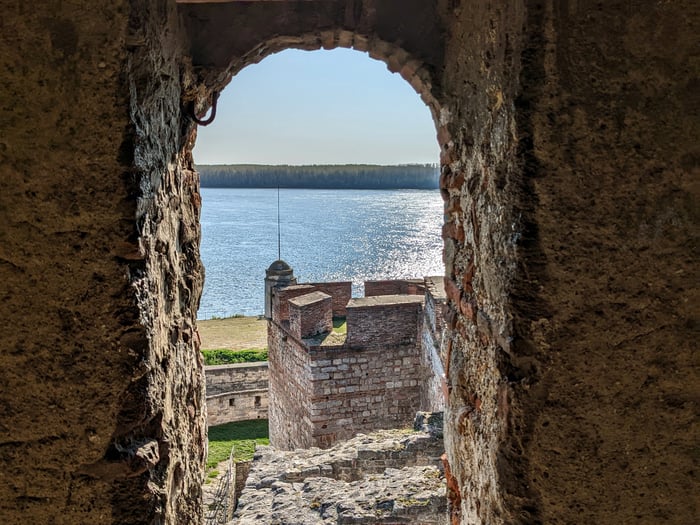 The Fortress is from the 10th century and built  (of course)  on top of a former Roman fortress.  It was  enlarged several times (13th and 14th centuries) and was used up through the Ottoman Empire. It's an important part of the Bulgarian military history, from medieval times till World War I.     The photo above was taken from the top tower and shows clear line of sight to the river.  The picture to the left shows the location of the moat which was filled in with water from the Danube.

We next walked back into town and passed a synagogue (under reconstruction), a mosque and an orthodox church.  Our guide emphasized the symbolism here, though much of the history of the area is filled with war and persecution of one religion or another.

Like all the countries we visited on this trip, Bulgaria is an Orthodox Christian country. While Bulgaria (like Hungary) allowed people to practice religion, it often discriminated against them in more subtle ways.  Examples might include that your visa was denied or your son was unable to get into their university of choice...all because you practiced religion.  The city, just as much of Bulgaria is declining in population.  There's just an insufficient amount of jobs to keep young people from moving abroad and an insufficient birthrate to offset an older population. 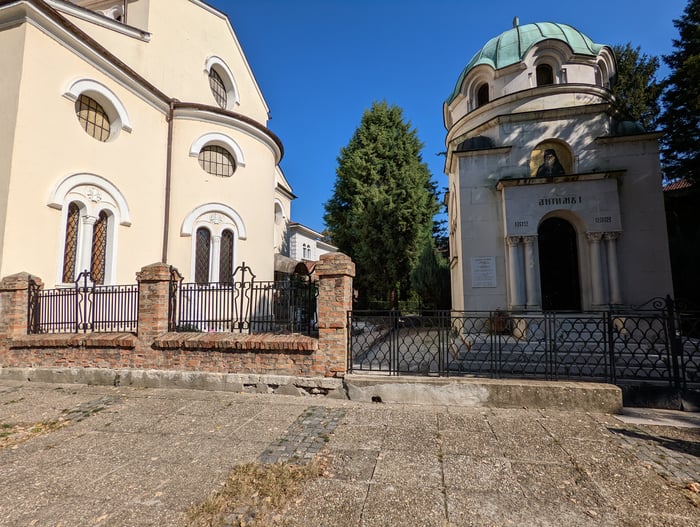 The Church and City 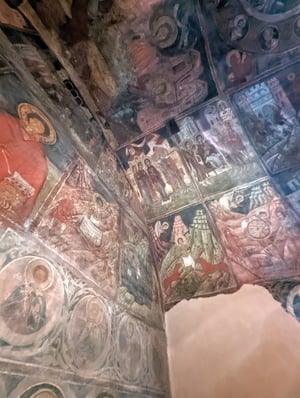 Our next stop was at an Orthodox Church.  Behind the church sat the original which was partially buried to comply with an old Bulgarian rule that no structure should be higher than a man on a horse.  The inside of the old church was decorated in ancient byzantine style art - all originals still.  The modern church, above is built in the typical orthodox style - which looks more like a mosque than a catholic church.

We then walked through the old city gates. The city used to be protected with a moat and wall and the gates were part of that wall. However, the moat attracted mosquitoes and so was filled in.  All that remain of the wall system is the gates.  The largest one is shown below, left.  Once through the gate, the city center emerges.  Streets radiate from the town center which is shown below, right.  We found very few signs in English and certainly no store names we recognized. We stopped in a local souvenir shop where the shopkeeper spoke flawless English.  All the materials were locally made, nothing from China we were told.  Quality of the jewelry, however was pretty poor so we moved on. Of all the places on our voyage this truly is the least marred by western travelers.    A peaceful morning on a beautiful sunny day. Followed by an easy afternoon of sailing. Another perfect river cruising day. 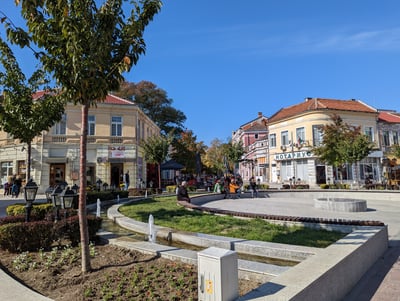 Last night on AmaDara - Riches of the Mekong #9

Tonight will be our last one on board our Vietnam and Cambodia river cruise.   This post is the...

It's hard to believe but we have one last Egyptian Temple to see on AmaWaterways' Secrets of Egypt...