The Dingle Peninsula was our focus for today, our fifth day of the Joe Sixpack Ireland Beer & Whiskey tour.  You can catch up starting with day 1 here. 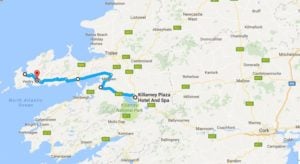 Our route to Dingle Peninsular

The road out of Killarney / shopping

Once back on the bus we learned about the local shad, trout and salmon industries.  We also learned about the some local summer fairs.  One, in Killorglin is about 400 years old and sponsored by Guinness.  A goat is crowned king while the queen is a young lady that writes the best essay.  This is just one example of local life in Ireland.  Local fairs rule. We stopped at a shopping area (requested by the group) where very good local wool products were for sale. 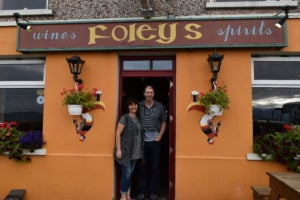 On the way to Dingle we stopped at Foley's bar from some Irish Coffee.

In Inch, we stopped at Foley's Bar and Restaurant.  This is a very

small, family owned and operated bar which served us all very good Irish coffees.  There's definitively something in the Irish milk that makes whipped cream, butter, yogurt and any dairy extremely creamy.  While the drinks were excellent the highlight was the singing.  The owner sang a wistful Irish ballad about sailing out of Dingle Bay.  She had a great voice, but what made this special was her sincerity. Each verse was sung with conviction and what seemed like first hand knowledge. Several people teared up as she sang.  It was hauntingly beautiful and certainly made me feel like I was part of the local culture.

In and around Dingle 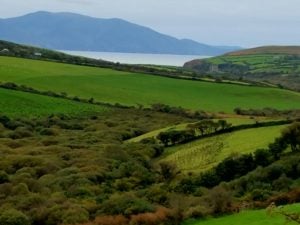 On the road to Dingle. 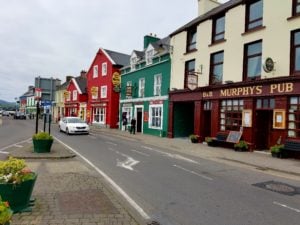 The little town of Dingle

The Dingle peninsula is mainly about the scenery.  We stopped numerous times between Inch Beach and Dingle city for photo opportunities.  The Atlantic Ocean provide a backdrop for mountains covered with sheep farms and dotted with houses.

We stopped in the city of Dingle for lunch and some shopping.  We had some excellent fish and ships made from locally caught cod.  As we walked along the harbor it was somewhat reminiscent of a New England village.  Lots of small local shops, many of which close up in the winter.  Lots of fresh fish (but no lobsters!).  The air was very fresh coming off the ocean and the green backdrop was magnificent. 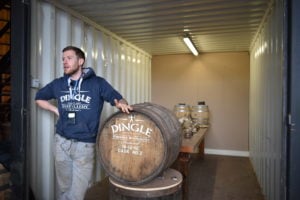 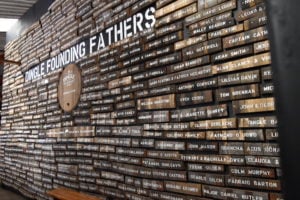 After lunch we stopped at the nearby Dingle Distillery.  They are just starting out.  In fact their whiskey will have aged for three years in November 2016 and so they have no whiskey for us to sample.  However they gave a great tour and instead we sampled their vodka and gin.  The gin was particularly tasteful; very aromatic and based on junipers.  We also tried the pure alcohol which had no apparent smell when in the cup.  But when we spilled some out on our hands and rubbed them together the alcohol evaporated.  Our hands were left smelling like the essential ingredients of the alcohol:  malt and yeast.  This is a great way to demonstrate the purity of the operation.

The distillery also had a unique way of financing their operation.  since Whiskey takes many years to recoup (the longer it ages the more valuable it is; 3 years is the legal minimum), there is a cash flow challenge in the early years operations.  So Dingle raised 3 MM Euro by promising a barrel of whiskey any investor (founding father they called it) who put up $6 - 7,000 Euro.  In effect this was a loan - investors provided up front cash and in return they would get their barrel of whiskey in 3 + years which could be sold, drank or saved for further appreciation. 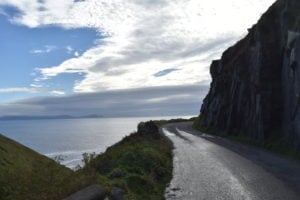 On the road out of Dingle

Skellig Islands across the bay

We next continued along the very scenic Slea head drive for even more great views.  It was a very clear day so we were able to see the 13 mile out to the Skellig Islands.  These were occupied by monks for hundreds of years. The monks built a monetary and included stone round houses as shelter (some of which we saw on Dingle peninsula).  This is where the last scene of Star Wars episode 8 was filmed.  After a few more photo stops, we found our way to the West Kerry Tavern to try some local brews.  The  crowd favorite was the Elderberry Dark ale (Black Elder) on cask. Very nice selection of local beers in an authentic local setting.

We basically retraced our steps for the next 1.5 hours to get back to the hotel.  We did stop once more to see where some of the new Star Wars movie was filmed.   This evening, we were were on our own for dinner in Killkenny which provides lots of choices.  There's also lots of bars with Irish food, beer and whiskey.

The Dingle Peninsula offers many fantastic views.  The town of Dingle offers lots of nice little shops, restaurants and bars.  The Dingle Distillery offers very nice gins and shortly high quality whiskey.  But what made the biggest impression on me today was the songs we heard at Foley's.   If what we saw of Dingle is a body, then surely what we heard at Foley's is the soul.  Before you leave, listen to a small portion below.

Today's adventure is to the Aran Islands.  This is day 7 of the Joe Sixpack Irish Beer & Whiskey...