We set our sites on the Cliffs of Moher today.  We check out of the Killkenney PLaza this morning.  Actually we simply leave our bags outside our rooms, have breakfast and then leave.  CIE takes care of check out and luggage for us automatically - nice.  Catch up with day 1 of our trip here.

Enroute to the cliffs

As we leave Kilkinney, we learn about the Irish school system.  The public schools here are all Catholic and as such all children go through confirmations and wear uniforms.  School is free though students must buy books themselves.  Most rent the books for a year about 400 Euro per year.  To get to university level (third level) students must pass a test first.  The only cost is 3000 Euro admin fee.

Ireland has very strict zoning laws administered by each county.  For example, a developer needs to have residency in a county for 18 years before they are able to develop a green field site for development.  As a result we saw no beachfront hotels or condos.  Even the hedgerows are controlled in the zoning.  As we continued our drive we also learned about the Rose of Tralee and the term "have a good bit of craic".

Other topics we learned about included the Irish passion for land as written about by John B. Keane's The Field.  According to our driver Frank, the Irish love a good story and it doesn't matter if it's true or not.  There's a long history of storytelling in Ireland, ending as recently as 1928.  Done in by the telephone. Perhaps this is why Ireland has produced so many Nobel award winners in literature.

The cliffs of Moher 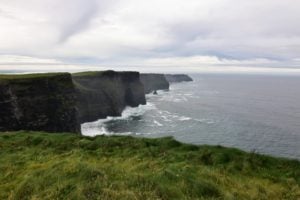 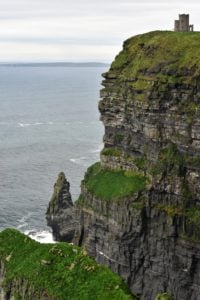 Striking views from Cliffs of Moher

This is Ireland's second most popular tourist attraction.  It's easy to see why.   The walkway offers fantastic views of the sea, cliffs, caves, islands all with the crashing Atlantic Ocean as backdrop.  There are puffins and dolphins living here, though we did not see any.  There's an interpretive center with a short movie that's worth walking through.    We had lunch in the little cafeteria which was actually half decent food.    We were advised to visit the cliffs first since the weather was good when we arrived.  Apparently the weather changes very rapidly here and sure enough, it rained during part of our visit (we were inside at the time).

We were at the cliffs for about 2 hours.  Enough time for plenty of pictures and views.  But there are miles of walking trails which you could spend all day walking.  You can also access O'brien's tower built in 1835.  And if you're a bird watcher, there's plenty to keep you busy as well.

Onto Galway - with a stop 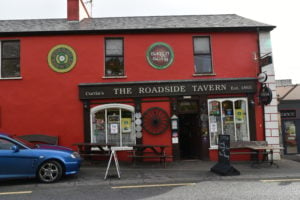 As we left the cliffs of Moher we were treated to a short discussion of some of the local beers we've sampled.  We were preparing for a stop at the Roadside Tavern which as founded in 1865.  They were service three of their own beers (made right next door) - a golden, a red and a dark.    Don (aka Joe Sixpack) explained that these are the three staples of every brewery and really of every pub we've been in.    The Irish Red isn't a true beer style, just something that's very popular in Ireland.  It tends to be mellow so Don aptly describes it as the comfort food of beer.  The dark is the stout variety, also very popular locally.  We got to sample all three (they luckily serve half pints which we  shared!) which was great.

The drive to Galway took about 1.5 hours.  The initial part of the drive was very scenic as we descended the heights through corkscrew hill with great views of the Burren. This is a limestone filled area which is not good for much farming.  it is truly barren.  Click here for more details.

We finally reached the Radison Blu hotel in Galway.  After another easy check-in, we had dinner as a group at the 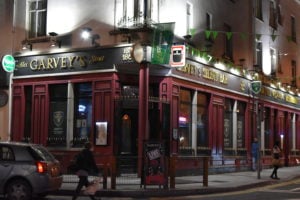 Galway - one of the quieter corners on a Friday night.

hotel and then an evening tour of Galway center.  The good folks at O'Hares provided us with a couple cases of beer which we served during diner.  The evening tour was excellent.  Our tour guide, Sean was a history major and he highlighted the history of various bars and whiskey distilleries around Galway.  And the distilleries are a very integral part of the local history indeed.  We went through the main square, down the main shopping and nightlight district of the Latin Quarter and ended up across he river in Spanish Arch, which is home to the burgeoning craft beer movement.

As Don (aka Joe Sixpack) had previously explained, up until very recently everyone here drank stouts or Irish red or goldens (or whiskey).  But now various pubs are serving American craft brews like Laguinitas on draft as well as some locally made craft brews.   So we sampled some (I had a locally brewed Elvis Juice beer (by Brewdog) which was very strongly flavor grapefruit IPA).  It's interesting to be in a bar in Ireland and hear the locals ordering a Stone IPA or a Victory.

A short walk back to the hotel revealed the Galway was in full Friday night swing.  Restaurants were filled, people were drinking in the streets outside the pubs as they fill up and there were just loads of people out walking the city.  Plenty of tour sits to be sure, but lots of locals as well.

The cliffs of Moher contrasts with the nightlife of Galway in many ways.  The Cliffs were stark and defiant against the Atlantic Ocean.  Galway seems to welcome each and every visitor as it appears there's more bars than people.  Some of the pubs were deemed "super pubs" meaning they held thousands of people.  And yet there were still plenty of people out on the streets having a good time.  The natural beauty of the cliffs or the welcoming ambiance of the city.  Both belong to Ireland.