Our Joe Sixpack Ireland Beer tour continues.  You can read about day 1 here and day 2 here.  We've been in Dublin each day, and covered the Guinness Storehouse and Teeling Distillery.  Many individuals in our group have also gone off in search of their favorite local brews.  We've seen a bit of history and had lots of free time to explore the city.

On this our third and final day in Dubin we start out with a drive to Glendalough.  We initially passed the Grand Canal in Dublin and then went through the Donnybrook section of the city. Next, our driver Frank gave us a bit of an Irish culture lesson. We learned that the prefix "kill" in native Irish means "church of".  We also heard a bit of ancient history of Ireland setting the stage for our visit to the monastery.  St. Patrick was largely responsible for converting the pagan Celts to Christianity in the 5th century.

Glendalough monastic city. The large round tower is typical of monasteries built in this era

The Glendalough monastery was formed in the 6th century as more monks came together to continue St. Patrick's mission. The monks built an entire city, which is why this is referred to as a monastic city.

This is also a national park which protects the ruins of a monastery whose buildings are 10th century.  Absolutely fascinating to hear how the monks lived and to see their surroundings in this very quiet river valley.  The monks were very secluded yet still faced numerous attacks over the ages - mostly from the Vikings in the 8th and 9th century and the Normans in the 13th century. 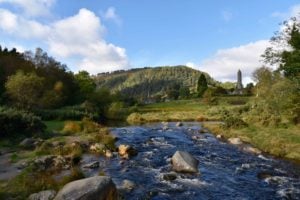 The word "Glendalough" means valley of two lakes.  There's an abundance of walking trails connecting the lakes with the visitor center and the monastic city.  First we watched a short video in the visitor center which described the monastic tradition in Ireland.  Next we toured the sites including the Gateway (main entrance into the city), the round tower (used for look outs, storage, bell tower and as a marker for those looking to find the monastery ), the cathedral, St. Kelvin's church, as well as the sprawling grave markers.   As we walked around, it was impossible not to be impressed with the dedication and perseverance of the monks.  The fact that so much survives after so many years is testament to their building skills.  After a short walk we headed back to the local hotel to have a quick bite (and a  local Wicklow brewing company Helles and St. Kevin's Red). 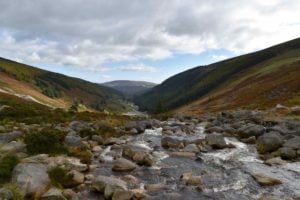 The start of the stream that runs through the monastic village below.

After our visit, we drove through the very scenic Wicklow mountains and through Wicklow gap, offering very picturesque views of the valley and surrounding granite outcroppings. These mountains were created by the retreating ice age.  The vistas were striking as we found our way to the top of the mountains.  We stopped at the headwaters of the little stream that ran through the monastic city.  We passed by some hydroelectric plants and lakes resulting from dams.  After arriving back at the hotel, we had the afternoon on our own.  Some went out in search of more local beer.  Others did some sightseeing while others got a work out in.

Dinner is at Taylors Three Rock in the town of Rathfarnham.  This includes  traditional Irish song, dancing and music.  The food here was good, despite being served en-mass.   They even served us Irish Whiskey which was a nice touch.  The evening we were there, they were hosting 3 groups.  I asked what their capacity was and they said that during the summer, they could have up to 15 bus loads of people.  So the room was relatively empty.

There were several dancers doing traditional Irish dance - very athletic in general.  I'm no judge of dancing, but they were generally entertaining to watch.  The stage was relatively small which limits the performance.  Next a live band came on stage.  I'm not quite sure why the band couldn't play music for the dancers.  The band played a few Irish folk songs but then, inexplicitly started playing modern music (think Elvis, Beatles).  The band was generally well received, but frankly I was looking for traditional Irish music.  So I was a little disappointed.

By the time we finished desert and the band stopped playing, it was quite late.  So we boarded our buses and about 30 minutes later were back at the hotel ready for sleep.

Lots of history today, experiencing the monastic city.  But also lots of geology and sweeping landscapes in the Wicklow Moutains.  And of course another afternoon in Dublin and some local music and dance in the evening.  History, sweeping vistas and culture.  Not a bad way to spend the day in Ireland!

We set our sites on the Cliffs of Moher today.  We check out of the Killkenney PLaza this morning....