Today's adventure is to the Aran Islands.  This is day 7 of the Joe Sixpack Irish Beer & Whiskey tour.  Pick up from our first day here.

The ride to the ferry 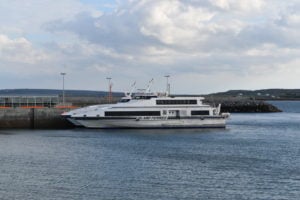 It takes about an hour to go from the Radison Blu in Galway to the ferry.  You need a ferry to get to the Aran Islands. Along the way we learned about the Irish language.  Approx 150,000 people or about 4% of the nation speak it as a first language.  In certain areas of western Ireland such as Dingle and the west coast north of Galway, the first language is Irish.  In fact they the areas we traverse today (the city of Spiddal) have an Irish college which serve as a national centers of Irish learning.  Students come from across the country for several weeks of immersive studies during school year breaks.

One of the stories Frank (of Guide / Driver) told is that the rise of mobile phones has actually helped the Gaelic language survive.  Kids are now texting in Irish so that their parents can't understand it.  It's an ancient language, with a common root with Scottish.  It comes from the Celts and so predates the Romans, Normans and Vikings.  All road signs in Ireland have the Gaelic fist and then English underneath.  All students must take some Gaelic in school. Who knew that new technology can have a positive unintended consequence for an ancient language.

We took the ferry to Inishmore, the largest of the three Aran Islands. They are famous for their geology, history and the Irish language and are located at the mouth of Galway Bay. It took about 25 minutes to cross the Atlantic at Ros a' Mhí.  Once on the island we boarded small buses to Dun Aonghasa. There's a couple of fascinating aspects to the site.  First is that spectacular views afforded once you hike to the top.  These are similar to the Cliffs of Moher. Second is the fact that this is a fort, first inhabited about 1500 BC.  Finally the area speaks Gaelic first and foremost, though everyone associated with tourism speaks English just fine.  The area is covered with stone walls.  Since the island is basically rock, the early settlers brought seaweed and sand up from the ocean to develop some sort of soil.  As a result they were able to raise sheep and cattle over time.

This is an absolutely fascinating site, and one which I could have used some additional time.  We were very lucky in that the weather was warm and clear.  We had a very nice lunch at the local restaurant.  It was nice enough that we ate outside.  The little restaurant was small but the staff was extraordinarily friendly and so we didn't mind the wait so much.  After lunch we took the little bus down down to the main town.  There's only a few shops and one bar that's opened. We looked through the woolen mills shop but didn't find anything of interest - though others in the group did.    Afterward we headed to the local bar to have a stout and watch the rugby game on TV. 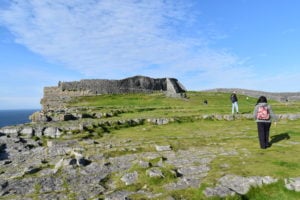 Walking near the edge towards some ancient ruins 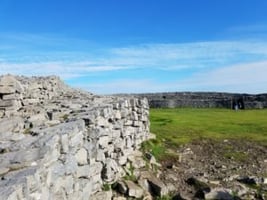 We had to be on at the ferry at 4:10 "on the hammer" (ie:  "sharp").  After the drive home, we had an included dinner at the Radison Blu hotel.  The food was great as was the company.  Some within the group decided against going out into the Galway nightlife.  Instead we stayed at the hotel bar and sampled some whiskeys.  Made for a very easy sleep. 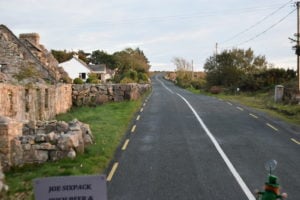 The Road back to Galway

Going back to Dun Aonghasa. Cattle graze but the rock can't be far below. Note the stone walls

We were outside and hiking around in the fresh air for much of the day which was very pleasant.  This part of Ireland is no longer brilliant green.  Rather, it's rocky and rather barren.  But it's nonetheless scenic. The Aran Islands were stark and seemingly inhospitable, yet people have been living there for millennia.  Their tenacity speaks a lot about the Irish as people.  They've been through so much historically. And yet they have persevered and in many respects have thrived in modern times.