Today we leave Galway and visit two breweries and a bar on our way to Trim.  This is our last full day of the Joe Sixpack Irish Beer & Whiskey tour.  You can start at our first day here.

Editors note:  This trip was actually taken in mid Oct 2016.

One last stop in Galway

We met Will Avery head brewmaster at Galway Bay Brewery at the hotel and he navigated us to the very nondescript looking brewery. Previously he worked in Georgia, US in a brewery so he knows the craft market well.  This was a Sunday morning so Will opened the shop just for us.  We had no real tour of the brewery - which was great. We simply asked questions and tried a bunch of beers.  Ireland has a very small craft beer scene - maybe a total of 1.5% market share (US is closer to 15%).

Galway Bay is growing quickly - at about 60,000 liters/yer this year and expecting double that next year.  Much of the success is attributed to the fact that they have their own pubs. This helps in three ways: first, they have a very good handle on volumes of each style since they control their own tabs.  Second, they aren't threatened by Guinness buying out their taps (as they are prone to do in public pubs). Third, they always have an outlet for new innovative beers to try out and get customer reaction to. 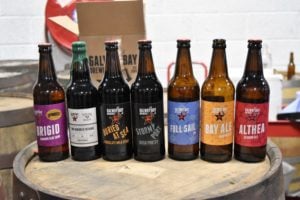 Asked about the differences in Irish craft brewing vs US,  Will's answer was typical of what we had heard and certainly of what we have observed. The culture is very much around the pint.  And in fact around several pints during an evening out.  So strong beers or spicy beers, best served in smaller tulip shaped glasses are not acceptable to the Irish beer drinker.  This means that demand is around low ABV  (alcohol) beers.  And of course Ireland has the culture of Irish Red and the Stout beers.

They also have a partnership with Teeling Distillery in sharing barrels.  So Galway makes a porter aged in a Teeling whiskey barrel.  We sampled a great porter milk stout, a session IPA, an Irish Red (perhaps my favorite Red of the week) and a very young Dortmonger (still in the fermenter) amongst others.  Will was very open and forthcoming (and entertaining) with his information as well as hospitable with his beer samples.  All before 11 am.  Not a bad morning.

Our Irish history lesson for the day

During our drive across Ireland, Frank told us a little about the Gypsy population in Ireland.  Currently 28,000 strong and has been since Viking times.  Historically they sell or fixing copper and tin in a caravan across Ireland.  You now only see them on the local roads.  They historically are called Tinkers and speak a unique language that the Irish can't understand.  They are very religious people.  The Irish government is trying to get them formal education, but that's difficult given their nomadic ways.

County Galway is famed for their stone walls and their were plenty to see.  Everywhere in the countryside there are stone walls separating property and farms but also creating pens for various animals.  They were also used to quarantine certain diseased animals. These are dry walls (no mortar used) and were introduced in the 1600's. 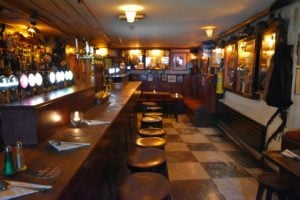 We then headed to Athlone, home to Sean's bar, known as the  oldest pub in Ireland.  It first opened in the year 900!  After getting everyone a drink, we were served a selection of sandwiches and soups.  Sean had their own brand of red and Stout which were just fine with us.  I had the 900 AD beer, an easy drinking pale lager.  This was a nice lunch break.

Next we headed to Trim which is northwest of Dublin.   First we went to the Bru Brewery where we got a little tour and a lot of tastings.  This is a very small brewery and certainly up and coming on the craft beer scene.  We sampled an American style IPA, a Irish Red, and the stout.  So interesting to listen to teh brewer talk about the Irish craft beer scene.  He didn't have anything good to say about Guinness - but that wasn't uncommon in the craft beer world.

A quick ride took us to the Trim castle hotel where our luggage had already been dropped off and sent to our rooms.  The hotel is literally across the street from Trim Castle, a magnificent 12th century castle.  By the time we arrived (5 pm) the interior tours were closed, but we were able to walk around the entire exterior.  Even today, when we are used to very large structures, standing next to the castle remains makes you feel small and insignificant.  It must have been looked massive and indestructible.  The pictures say it all.

We gathered for a farwell drink in the hotel bar which overlooks the castle itself.  We toasted Frank our excellent driver / guide and Don Russell (aka Joe Sixpack) as our beer host.  Don put together a great collection of beer and whiskey venues.  The group was gracious enough to also toast me for putting the tour together.  We filed into the dining room for a very nice meal at the hotel.  My fish pie was excellent!

Reflections on the day

Two breweries, a pub and a hotel bar.....what a day!   And here we are looking out at a fantastic castle as our tour ends.  Today, we not only crossed Ireland from Galway, but we crossed back in time (10th century bar and a 12th century castle).  We also straddled various beers - from traditional stouts to the up an coming craft IPAs that are just starting to emerge in Ireland.

Something really nice happened as we were leaving dinner that night.  Everyone hugged everyone else good-bye.  To me, this meant more than the great beer we sampled.  We grew close as a group and truly missed anticipated missing each other over the next days.  Group cohesion is an interesting phenomena but you know it when you feel it.  Our group of 24 were all great people, honest and hard working, polite and respectful.  What more can you ask?  How about sharing Ireland's rich history, culture and scenery.

Trim Castle. Note our hotel all the way to the right.