Today we are in Luxor, nearing the end of our Secrets of Egypt & the Nile tour with AmaWaterways.  Luxor is a good sized city and home to one of the largest Temples - Karnac.   This temple was built over thousands of years with over 30 pharaohs contributing to the final product.  It contains a sacred lake for priests as well.  This post is part of a series chronically our time AmaWaterways Secrets of Egypt and the Nile.  Here's the start of the series. 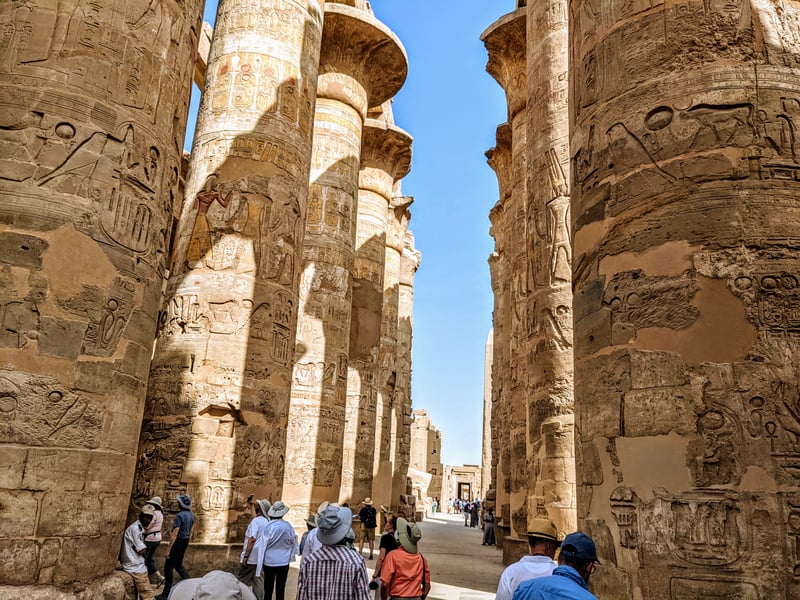 Sometimes not so Secret Service

It's a short 10 minute transfer from the ship to the Temple. Still we have a full police escort of our bus. Throughout our trip there is always some form of security.  It might be armed security forces that meet us at our destination - always dressed in suits and always very discreet.  Or it may be police escort like today - complete with sirens blaring.  We're told the Egyptian government has been requiring tourist police presence for the last decade.  So important is the tourist business that the government doesn't ever want anything negative to  happen to foreign nationals.  We never felt any unsafe on any of our days in Egypt, even during free time.  In fact, all the locals we came across were friendly and helpful.  Even the shop keepers hawking their wares were relatively respectful - typically (though not always) all it took was a "no thank you" or shake of the head to send them off to their next victims screaming "one dolla, one dolla". (one dollar - US dollars are gladfully accepted).

Karnac Temple is a huge complex and overwhelming to fully comprehend in the few very hot hours we had there.  It stands at one end of the Avenue of Sphinxes.  The Temple was originally built to honor Amon, the god of air and sun.  Each pharaoh built their own tribute to various gods, sometimes trying to out do their predecessor.  The most impressive area is the Great Hypostyle Hall.  It consists of over 130 massive columns, most over 40 ft tall while those in the middle about 70 feet tall.     Each column was filled with hieroglyphics telling the stories of the gods and also detailing how each god was to be blessed.  It took literally thousands of priests working all day and night to bless all these columns and it's estimated over 80,000 servants and slaves were needed to maintain the entire Temple complex. Their quarters surround the Temple proper.

The temple contains many separate rooms and chambers and also includes a Sacred Lake where priests purified themselves periodically. A beautifully carved giant scarab beetle stands guard by the Lake, promising good luck to those that walk around it three times in each direction.  The beetle represents the god Khepri a sun god bringing a renewal of life with each sunrise. There's obelisks, ram headed sphinxes, and the usual massive statues of pharaohs. 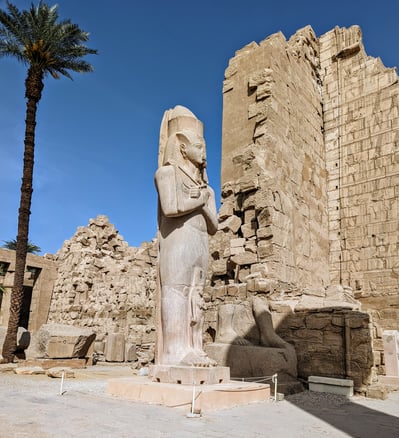 Images of Obelisks and statues from Karnac

After our visit to Karnac, we went to the Papyrus Institute to learn the art of making papyrus. The plant is found around the world, though the Egyptian version is unique in that the stems are three sided.  The process is straightforward. First, the outer layer of the stalk is trimmed off and the inner stalk is cut into thin strands. The strands are rolled then soaked in water for about a day.  The soaked strips are then laid side by side as well as perpendicular to each other and pounded (like pounding a chicken breast before cooking) and then placed under some weight. The pressure forces the strips together.  The nascent paper is then soaked another three days before burnishing with a smooth stone.  It's the sugars in the papyrus plant that binds the strands together. 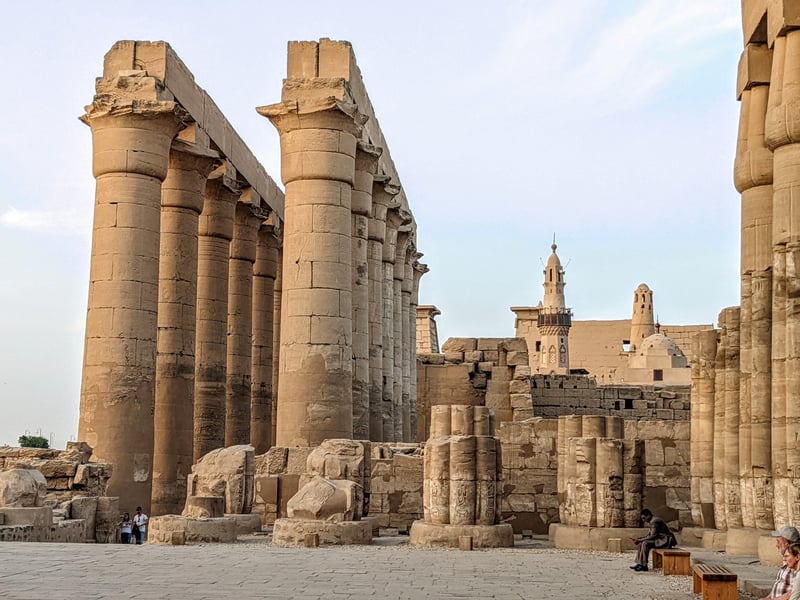 At the opposite end of the avenue of the Sphinxes from Karnac lay the Luxor Temple about 1.7 miles away.  .  Although the temple appears dedicated to  the triad gods of Amun, Khnosu and Mut it is thought instead to be dedicated to the Pharaoh himself.   As always huge statues of Rameses dominate the scene.  Here's a few of the more interesting aspects of this temple:

Next up:  Dendera Temple

We continue our Secrets of Egypt & the Nile tour. Click here to catch up from the beginning.  Today...