We continue our Secrets of Egypt & the Nile tour. Click here to catch up from the beginning.  Today we are in Edfu Egypt.  Once we depart the ship we take a horse a carriage ride to one of the best preserved Temples of Ancient Egypt,  Edfu Temple, dedicated to the Falcon God Horus.

Our transport to and from Edfu Temple was horse and  buggy ride. Here's our view in a traffic jam.  Those are motorized tuk-tuks in black.  Most of the way, the street was lined with shops and people though.

A ride to remember

The ride to and from the Temple was an event in and of itself.  We drove through a small village but it seemed like everyone from 100 miles away was trying to either ride in the same path or cross our path at the same time.   We were high above the road in our horse drawn carriage so we could see everything.  But the view was of total chaos.  The horse shared the road with trucks, cars, motorized tuk-tuks, motorbikes and walkers.  People were crossing the street at all angles and places along the road. The road was lined with shops, marts, stalled cars and mules.   A couple of times our driver, who spoke no conversational English simply stopped the horse.  At other times, traffic cleared a bit, the horse went into full gallop. Many times, the driver yelled at people going by - though were told this was friendly conversation.  One time he simply stopped the cart and left, only to be replaced by another driver (surprise!).  The universal language of money was well understood by all. The other thing that remained constant was the blowing dust! 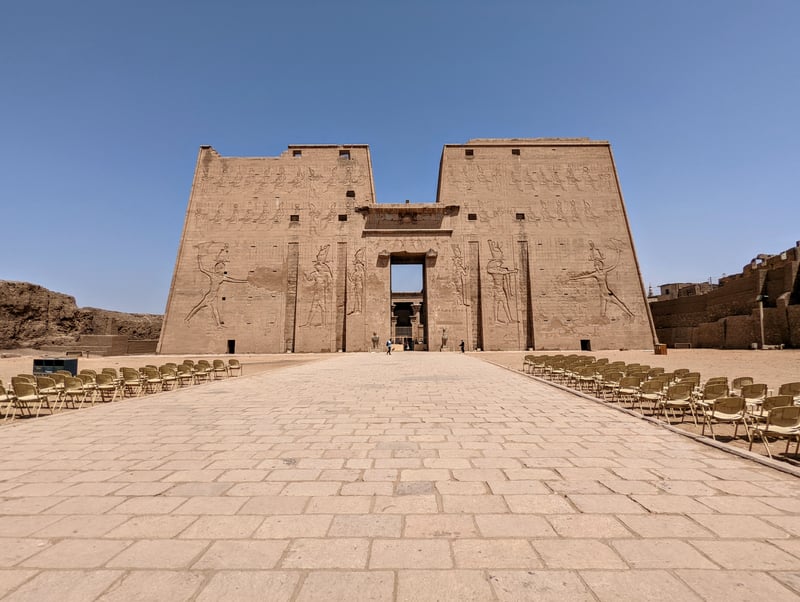 The Temple of Edfu, in honor of Horus the Falcon god

This temple was built during the Roman-Greco period of Egyptian history, about 200 BC.  The Greeks, once they had conquered the Egyptians, decided to keep their subjects busy (and happy) by asking them to build (and rebuild) various Temples.  In this way, there was less reason for the Egyptians to revolt since they were allowed to go about daily life as they had done before, including the rituals and practices of their highly developed cults. So the Temple was purely Egyptian art, though built under Greek rule. 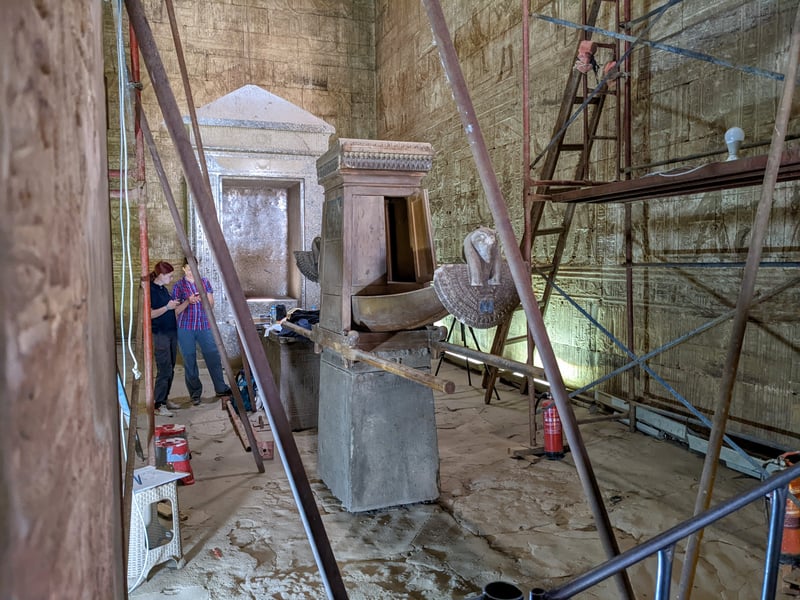 The Holies of Holies at Edfu, undergoing restoration. 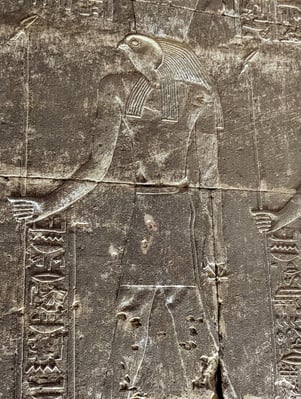 Horus the Falcon god was an important figure in this part of ancient Egypt and the size and intricacies of the carvings reflect that fact.    The Temple follows many of the same patterns as others.  The oldest part of the Temple was built first, with later portions added later as the Temple grew. So the "holy of holies", the inner sanctum that was only seen by high priests was built first. This was currently under a restoration project.  This temple took almost 200 years to construct and so there were several outer chambers surrounding the inner sanctum.

The idol worshiping of Egyptian cults ended around 400 AD when Christianity was mandated by the Romans (who previously had banned it).  The Temple was visited by less and less people and over time totally abandoned.  Over the years, decades and centuries the Nile floods and leaves sentiment.  Approx 1 meter of sentiment per 200 years in fact.  Combine Nile flooding with blowing dust and you have Temples that fill up with sand.  Eventually people seeking shelter find the sand floor to be a perfect distance away from the Temple roof to become a nice shelter.  Using fire to cook and heating, deposits a thick black coating on the temple ceilings.  These temples were discovered in the 1800's , dug out and have been undergoing restoration ever since. 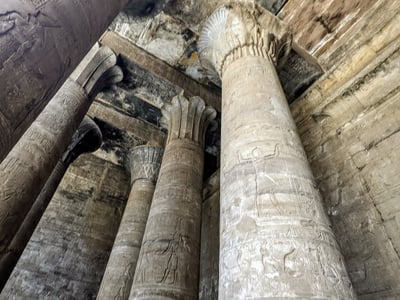 A view of the ceiling showing the black soot covered ceilings

Next up:  Abu Simbel

In a few weeks, in mid March we leave for our first trip to the Middle East. We're off to Jordan...

We left the ancient worlds of Luxor early in the morning for a flight to Cairo.  After landing we...