It's hard to believe but we have one last Egyptian Temple to see on AmaWaterways' Secrets of Egypt and the Nile.  Click here to start at the beginning of our trip.  We're still in Luxor and a short bus ride away is  Dendera Temple, dedicated to the god Hathor.

While this is an ancient site, the oldest current structures were built around 350 BC, though much of was built closer to 50 BC.  This is an extremely well preserved Temple.  It was started during Greek rule but completed under the Roman emperor Trajan.  Hathor was a goddess who would journey from her temple to visit Horus (gods were apparently married) .  Her return to Dendera signified the time when the Nile would flood. Flooding  was a good thing as it brought water and nutrients to the agricultural fields along the Nile, thus ensuring a stable food supply. 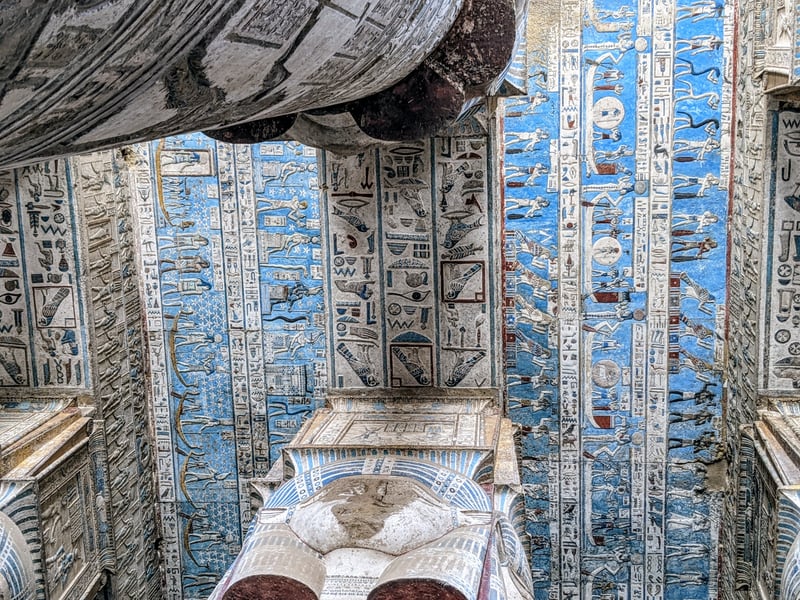 A view of the restored ceiling from Dendera

We walked around the entire exterior wall, which is fully intact and filled with hieroglyphics and high relief pictures etched in stone.  In the back we see the only representation of queen Nefertiti known to exist on a Temple. (shown to the right)  Inside we are treated to beautifully restored columns, walls and ceilings.  The restoration process has improved over time, and this temple just received the most advanced process.  Up to about 2015, removal of the soot resulted in removal of the original colors.  But the new process is able to keep the original colors.  The beautiful blues of the ceiling are truly impressive.

The Temple is known not only for it's beautiful and colorful artwork, but also for it's representation of the Zodiac signs and configurations of the planets.

Back on the ship, we watch the original movie "Murder on the Nile", with a very young Mia Farrow and an elder Bette Davis and Peter Ustinov.  The movie was very cliché and corny, but fun to watch as many of the sites we had been to this week were featured in the movie.  Our Egyptologist had warned us to look for the several places that the movie modified reality - only by our visit was that obvious.

This is our last night aboard the AmaDahlia so we need to pack and settle our accounts.  It's a relaxing evening . 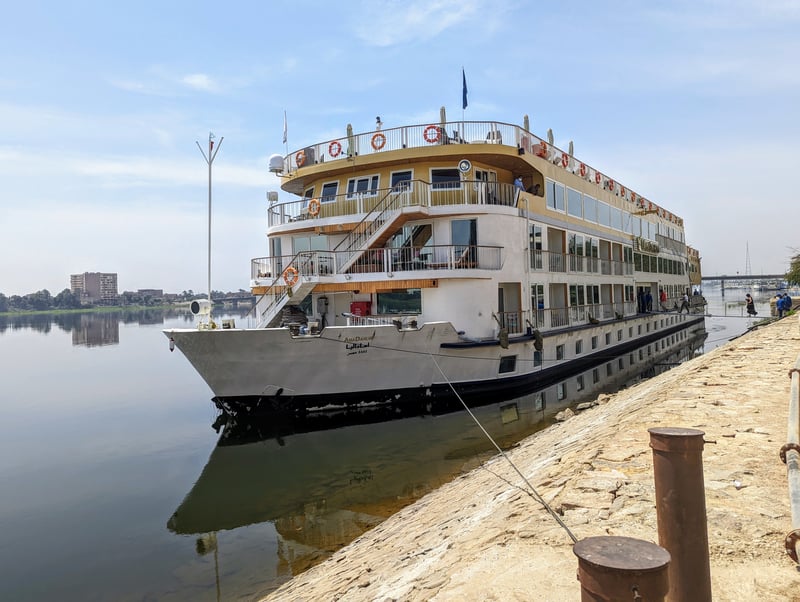 Our ship, the AmaDahlia.  Note how still and flat the Nile River is.

Next: Cairo in the Rear View Mirror